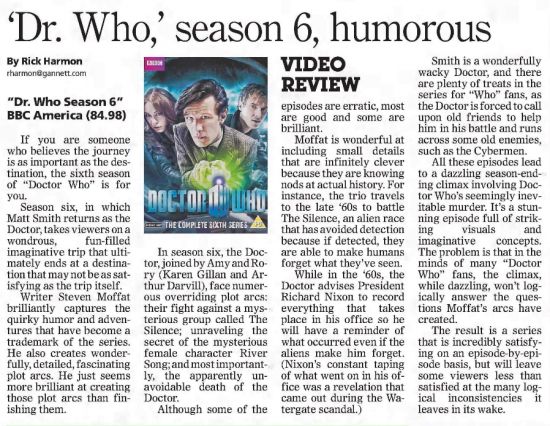 If you are someone who believes the journey is as important as the destination, the sixth season of "Doctor Who" is for you.

Season six, in which Matt Smith returns as the Doctor, takes viewers on a wondrous, fun-filled imaginative trip that ultimately ends at a destination that may not be as satisfying as the trip itself.

Writer Steven Moffat brilliantly captures the quirky humor and adventures that have become a trademark of the series. He also creates wonderfully, detailed, fascinating plot arcs. He just seems more brilliant at creating those plot arcs than finishing them.

In season six, the Doctor, joined by Amy and Rory (Karen Gillan and Arthur Darvill), face numerous overriding plot arcs: their fight against a mysterious group called The Silence; unraveling the secret of the mysterious female character River Song; and most importantly, the apparently unavoidable death of the Doctor.

Although some of the episodes are erratic, most are good and some are brilliant.

Moffat is wonderful at including small details that are infinitely clever because they are knowing nods at actual history. For instance, the trio travels to the late '60s to battle The Silence, an alien race that has avoided detection because if detected, they are able to make humans forget what they've seen.

While in the '60s, the Doctor advises President Richard Nixon to record everything that takes place in his office so he will have a reminder of what occurred even if the aliens make him forget. (Nixon's constant taping of what went on in his office was a revelation that came out during the Watergate scandal.)

Smith is a wonderfully wacky Doctor, and there are plenty of treats in the series for "Who" fans, as the Doctor is forced to call upon old friends to help him in his battle and runs across some old enemies, such as the Cybermen.

All these episodes lead to a dazzling season-ending climax involving Doctor Who's seemingly inevitable murder. It's a stunning episode full of striking visuals and imaginative concepts. The problem is that in the minds of many "Doctor Who" fans, the climax, while dazzling, won't logically answer the questions Moffat's arcs have created.

The result is a series that is incredibly satisfying on an episode-by-episode basis, but will leave some viewers less than satisfied at the many logical inconsistencies it leaves in its wake.