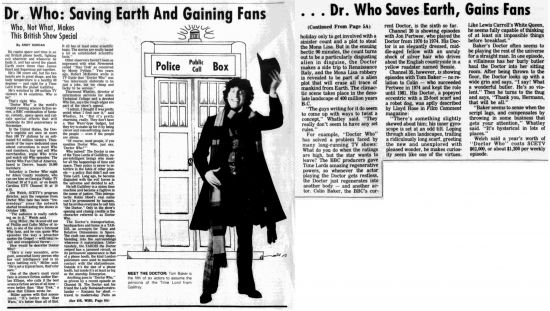 Who, Not What, Makes This British Show Special

He roams space and time in an old British phone booth, fighting evil wherever and whenever he finds it, and has saved the planet Earth more times than James Bond and Superman put together.

He's 750 years old, but his two hearts are in great shape, and his body temperature is a healthy 60 degrees — just right for a Time Lord from the planet Gallifrey.

"Doctor Who" is the world's longest running science fiction series, a BBC combination of fantasy. comedy, space opera and cut-rate special effects that will celebrate its 23rd anniversary in November.

In the United States, the Doctor's exploits are seen on more than 100 TV stations by an estimated 9.5 million viewers. Thousands of the more dedicated ones attend conventions to meet Who cast members, buy and sell Who merchandise, argue Who trivia and watch old Who episodes. The Doctor Who Fan Club of America, based in Denver, boasts 18,000 members.

Saturday is Doctor Who night for Aiken County residents, who can see him on Georgia Public TV Channel 20 at 9 p.m. or on South Carolina ETV Channel 35 at 10 p.m.

Jim Welch, SCETV's program director, says the response from Doctor Who fans has been "tremendous" since the network started broadcasting the shows in October 1985.

"The audience is really catching on to it," Welch said.

Greg Miller, the 14-year-old son of Phillip and Cathy Miller of Aiken, is one of the area's foremost Who fans, and he can quote Who episodes the way a preacher quotes the Gospel — with total recall and evangelical fervor. How would he describe Doctor Who?

"He's a very eccentric, arrogant, somewhat loony person who has vast intelligence and is always battling evil," Miller said. "He's not a typical hero, that's for sure."

One of the show's most vocal fans is science fiction author Harlan Ellison, who calls it the best science fiction series of all time — even better than "Star Trek," a show that Ellison wrote for.

Other observers haven't been as impressed with what Newsweek called '"Star Trek' as conceived by Monty Python." Two years ago, Robert McKenzie wrote in TV Guide that - Doctor Who" was "too laboriously elaborate to be just a joke, but too cheap and tacky to he serious."

Thurmond Whatley, director of information services for Aiken Technical College and a devoted Who fan, says the rough edges are part of the show's appeal.

"I admit, I thought it was pretty weird when I first saw it," said Whatley, 34. "But it's pretty charming, really. They don't have a 'Star Wars'-type budget, but they try to make up for it by being clever and concentrating more on the people — even if the people are aliens.

"Of course, most people, if you mention Doctor Who, just say, 'Doctor Who?"'

Who indeed? The Doctor is one of the Time Lords of Gallifrey, super-intelligent beings who monitor all the happenings of time and space. Their policy is never to interfere in the fates of other planets — a policy that didn't suit one Time Lord. Long ago, he became disgusted with the evil forces in the universe and decided to act. He left Gallifrey in a stolen time machine and became a fugitive in the name of justice. This intergalactic Robin Hood's real name can't be pronounced by humans, but he invites everyone to call him "the Doctor." Only in the show's opening and closing credits is the character referred to as Doctor Who.

The Doctor's transportation, headquarters and home is a TARDIS, an acronym for Time and Relative Dimensions in Space. The craft can assume any shape, blending into the surroundings wherever it materializes. Unfortunately, the TARDIS the Doctor swiped has a jammed circuit, so its permanent appearance is that of a phone booth, the kind London policemen once used to maintain contact with the stationhouse. Outside it's the size of a phone booth, but inside it's at least as big as the starship Enterprise.

Anything goes in "Doctor Who," as proven by a recent episode on Channel 35. The Doctor and his friend the Lady Romanadvoratrelundar — Romana for short — travel to modern-day Paris on holiday only to get involved with a sinister count and a plot to steal the Mona Lisa. But in the ensuing hectic 90 minutes, the count turns out to be a particularly disgusting alien in disguise, the Doctor makes a side trip to Renaissance Italy, and the Mona Lisa robbery is revealed to be part of a alien plot that will erase all trace of mankind from Earth. The climactic scene takes place in the desolate landscape of 400 million years B.C.

"The guys writing for it do seem to come up with ways to twist a concept," Whatley said. "They really don't seem to have any set rules."

For example, "Doctor Who" has solved a problem faced by many long-running TV shows: What do you do when the ratings are high, but the star wants to leave? The BBC producers gave Time Lords amazing regenerative powers, so whenever the actor playing the Doctor gets restless, the Doctor just regenerates into another body - and another actor. Colin Baker, the BBC's cur rent Doctor, is the sixth so far.

Channel 20 is showing episodes with Jon Pertwee, who played the Doctor from 1970 to 1974. His Doctor is an elegantly dressed, middle-aged fellow with an unruly shock of silver hair who drives about the English countryside in a yellow roadster named Bessie.

Channel 35, however, is showing episodes with Tom Baker — no relation to Colin — who succeeded Pertwee in 1974 and kept the role until 1981. His Doctor, a popeyed eccentric with a 22-foot scarf and a robot dog, was aptly described by Lloyd Rose in Film Comment magazine:

"There's something slightly skewed about him; his inner gyroscope is set at an odd tilt. Loping through alien landscapes, trailing a ridiculously long scarf, greeting the new and unexplored with pleased wonder, he makes curiosity seem like one of the virtues. Like Lewis Carroll's White Queen, he seems fully capable of thinking of at least six impossible things before breakfast."

Baker's Doctor often seems to be playing the rest of the universe for a straight man. In one episode, a villainess has her burly butler haul the Doctor into her sitting room. After being thrown to the floor, the Doctor looks up with a wide grin and says, "I say! What a wonderful butler. tie's so violent." Then he turns to the thug and says, "Thank you, Hermann, that will be all."

"Baker seems to sense when the script lags, and compensates by throwing in some business that gets your attention," Whatley said. "It's hysterical in lots of places."

Caption: MEET THE DOCTOR: Tom Baker is the fifth of six actors to assume the persona of the Time Lord from Gallitrey.