Dr. Who British Sci-Fi Film from Another Era 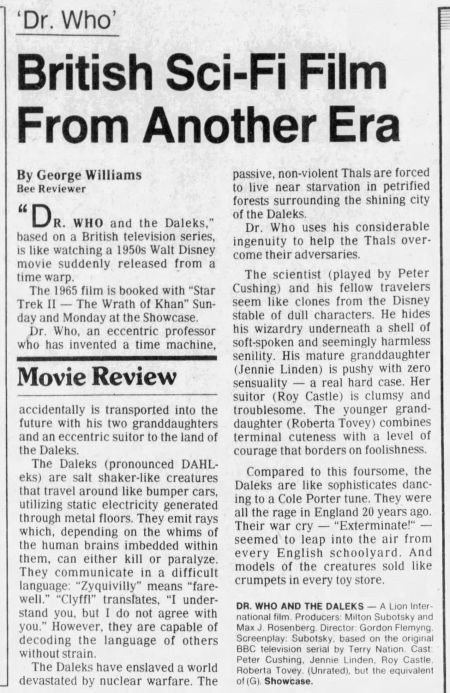 DR. WHO and the Daleks, based on a British television series, is like watching a 1950s Walt Disney movie suddenly released from a time warp.

The 1965 film is booked with Star Trek II - The Wrath of Khan Sunday and Monday at the Showcase. Dr. Who, an eccentric professor who has invented a time machine, accidentally is transported into the future with his two granddaughters and an eccentric suitor to the land of the Daleks.

The Daleks (pronounced DAHL-eks) are salt shaker-like creatures that travel around like bumper cars, utilizing static electricity generated through metal floors. They emit rays which, depending on the whims of the human brains imbedded within them, can either kill or paralyze. They communicate in a difficult language: Zyquivilly means farewell. Clyffl translates, I understand you, but I do not agree with you. However, they are capable of decoding the language of others without strain.

The Daleks have enslaved a world devastated by nuclear warfare. The passive, non-violent Thals are forced to live near starvation in petrified forests surrounding the shining city of the Daleks.

Dr. Who uses his considerable ingenuity to help the Thals overcome their adversaries.

The scientist (played by Peter Cushing) and his fellow travelers seem like clones from the Disney stable of dull characters. He hides his wizardry underneath a carapace of soft-spoken and seemingly harmless senility. His mature granddaughter (Jennie Linden) is pushy with zero sensuality - a real hard case. Her suitor (Roy Castle) is clumsy and troublesome. The younger granddaughter (Roberta Tovey) combines terminal cuteness with a level of courage that borders on foolishness.

Compared to this foursome, the Daleks are like sophisticates dancing to a Cole Porter tune. They were all the rage in England 20 years ago. Their war cry - Exterminate! - seemed to leap into the air from every English schoolyard. And models of the creatures sold like crumpets in every toy store.