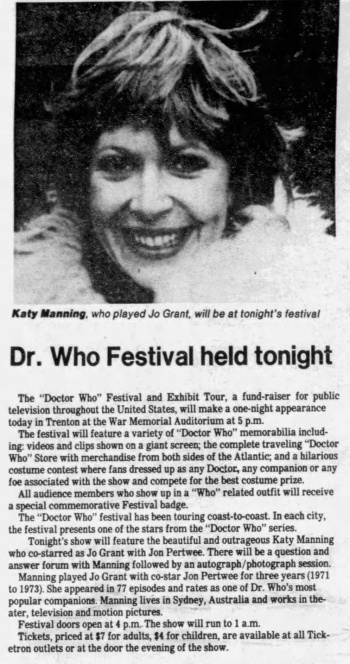 The "Doctor Who" Festival and Exhibit Tour, a fund-raiser for public television throughout the United States, will make a one-night appearance today in Trenton at the War Memorial Auditorium at 5 p.m.

The festival will feature a variety of "Doctor Who" memorabilia including: videos and clips shown on a giant screen; the complete traveling "Doctor Who" Store with merchandise from both sides of the Atlantic; and a hilarious costume contest where fans dressed up as any Doctor, any companion or any foe associated with the show and compete for the best costume prize.

All audience members who show up in a "Who" related outfit will receive a special commemorative Festival badge.

Tonight's show will feature the beautiful and outrageous Katy Manning who co-starred as Jo Grant with Jon Pertwee. There will be a question and answer forum with Manning followed by an autograph/photograph session.

Manning played Jo Grant with co-star Jon Pertwee for three years (1971 to 1973). She appeared in 77 episodes and rates as one of Dr. Who's most popular companions. Manning lives in Sydney, Australia and works in theater, television and motion pictures.

Tickets, priced at $7 for adults, $4 for children, are available at all Ticketron outlets or at the door the evening of the show.

Caption: Katy Manning who played Jo Grant, will be at tonight's festival