Dr. Who Gets His Due At Concerto Competition 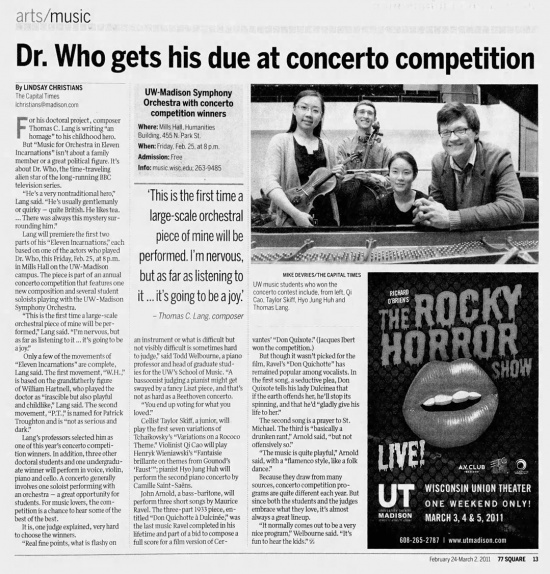 For his doctoral project, composer Thomas C. Lang is writing "an homage" to his childhood hero.

But "Music for Orchestra in Eleven Incarnations" isn't about a family member or a great political figure. It's about Dr. Who, the time-traveling alien star of the long-running BBC television series.

"He's a very nontraditional hero," Lang said. "He's usually gentlemanly or quirky - quite British. He likes tea. ... There was always this mystery surrounding him."

Lang will premiere the first two parts of his "Eleven Incarnations," each based on one of the actors who played Dr. Who, this Friday, Feb. 25, at 8 p.m. in Mills Hall on the UW-Madison campus. The piece is part of an annual concerto competition that features one new composition and several student soloists playing with the UW-Madison Symphony Orchestra.

"This is the first time a large-scale orchestral piece of mine will be performed," Lang said. "I'm nervous, but as far as listening to it ... it's going to be a joy."

Only a few of the movements of "Eleven Incarnations" are complete, Lang said. The first movement, "W.H.," is based on the grandfatherly figure of William Hartnell, who played the doctor as "irascible but also playful and childlike," Lang said. The second movement, "P.T.," is named for Patrick Troughton and is "not as serious and dark."

Lang's professors selected him as one of this year's concerto competition winners. In addition, three other doctoral students and one undergraduate winner will perform in voice, violin, piano and cello. A concerto generally involves one soloist performing with an orchestra - a great opportunity for students. For music lovers, the competition is a chance to hear some of the best of the best.

It is, one judge explained, very hard to choose the winners.

"Real fine points, what is flashy on an instrument or what is difficult but not visibly difficult is sometimes hard to judge," said Todd Welbourne, a piano professor and head of graduate studies for the UW's School of Music. "A bassoonist judging a pianist might get swayed by a fancy Liszt piece, and that's not as hard as a Beethoven concerto.

"You end up voting for what you loved."

John Arnold, a bass-baritone, will perform three short songs by Maurice Ravel. The three-part 1933 piece, entitled "Don Quichotte à Dulcinée," was the last music Ravel completed in his lifetime and part of a bid to compose a full score for a film version of Cervantes' "Don Quixote." (Jacques Ibert won the competition.) But though it wasn't picked for the film, Ravel's "Don Quichotte" has remained popular among vocalists. In the first song, a seductive plea, Don Quixote tells his lady Dulcinea that if the earth offends her, he'll stop its spinning, and that he'd "gladly give his life to her."

The second song is a prayer to St. Michael. The third is "basically a drunken rant," Arnold said, "but not offensively so."

"The music is quite playful," Arnold said, with a "flamenco style, like a folk dance."

Because they draw from many sources, concerto competition programs are quite different each year. But since both the students and the judges embrace what they love, it's almost always a great lineup.

"It normally comes out to be a very nice program," Welbourne said. "It's fun to hear the kids."