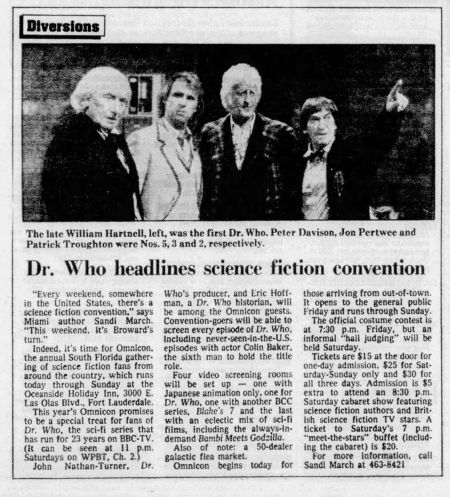 Indeed, it's time for Omnicon, the annual South Florida gathering of science fiction fans from around the country, which runs today through Sunday at the Oceanside Holiday Inn, 3000 E. Las Olas Blvd., Fort Lauderdale.

This year's Omnicon promises to be a special treat for fans of Dr. Who, the sci-fi series that has run for 23 years on BBC-TV. (It can be seen at 11 p.m. Saturdays on WPBT, Ch. 2.)

John Nathan-Turner, Dr. Who's producer, and Eric Hoffman, a Dr. Who historian, will be among the Omnicon guests. Conventiongoers will be able to screen every episode of Dr. Who, including never-seen-in-the-U.S. episodes with actor Colin Baker, the sixth man to hold the title role.

Four video screening rooms will be set up -- one with Japanese animation only, one for Dr. Who, one with another BBC series, Blake's 7 and the last with an eclectic mix of sci-fi films, including the always-in-demand Bambi Meets Godzilla.

Omnicon begins today for those arriving from out-of-town. It opens to the general public Friday and runs through Sunday.

The official costume contest is at 7:30 p.m. Friday, but an informal "hall judging" will be held Saturday.

Tickets are $15 at the door for one-day admission, $25 for Saturday-Sunday only and $30 for all three days. Admission is $5 extra to attend an 8:30 p.m. Saturday cabaret show featuring science fiction authors and British science fiction TV stars. A ticket to Saturday's 7 p.m. "meet-the-stars" buffet (including the cabaret) is $20.