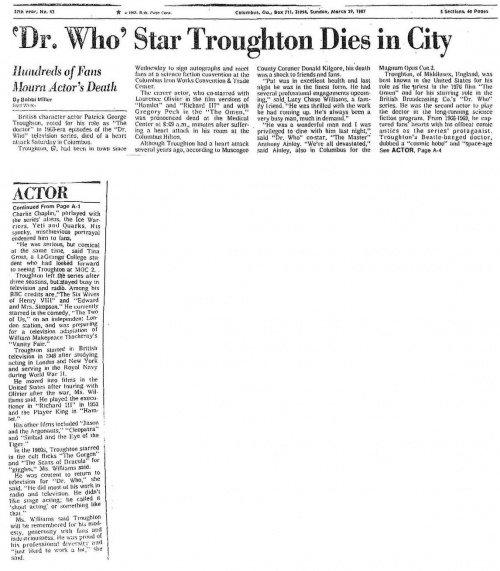 British character actor Patrick George Troughton, noted for his role as "The doctor" in 19G0-era episodes of the "Dr. Who" television series, died of a heart attack Saturday in Columbus.

Troughton, 67, had been in town since Wednesday to sign autographs and meet fans at a science fiction convention at the Columbus Iron Works Convention & Trade Center.

The career actor, who co-starred with Laurence Olivier in the film versions of "Hamlet" and "Richard Ill" and with Gregory Peck in the "The Omen," was pronounced dead at the Medical Center at 8:09 a.m., minutes after suffering a heart attack in his room at the Columbus Hilton.

Although Troughton had a heart attack several years ago, according to Muscogee County Coroner Donald Kilgore, his death was a shock to friends and fans.

"Pat was in excellent health and last night he was in the fittest form. He had several profession& engagements upcoming," said, Lucy Chase Williams, a family friend. "He was thrilled with the work he had coming up. He's always been a very busy man, much in demand."

He was a wonderful man and I was privileged to-dine with him lust night," said "Dr. Who" co-star, "The Master" Anthony Ainley. "We're all devastated," said Ainley, also in Columbus for the Magnum Opus Con 2.

Troughton, of Middlesex, England, was best known in the United States for his role as' the 'priest in the 1976 film "The Omen" and for his starring role in the British Broadcasting Co.'s "Dr. Who" series. lie was the second actor to play the doctor in the long-running science fiction program. From 1966-1969, he captured fans' hearts with his offbeat comic antics as the series' protaganist. Troughton's Beatle-banged doctor, dubbed a "cosmic hobo" and "space-age Charlie Chaplin," parlayed with the series' aliens, the Ice Warriors, Yeti and Quarks. His spunky, mischievious portrayal endeared him to fans.

"He was serious, but comical at the same time," said Tina Gross, a LaGrange College student who had looked forward to seeing Troughton at MOC 2.

Troughton left the series after three seasons, but stayed busy in television and radio. Among his BBC credits are "The Six Wives of Henry VIII", and "Edward and Mrs. Simpson." He currently starred in the comedy, "The Two of Us," on an independent London station, and was preparing for a television adaptation of William Makepeace Thackeray's "Vanity Fair."

Troughton started in British television in 1948 after studying acting in London and New York and serving in the Royal Navy during World War II.

He moved into films in the United States after touring with Olivier after the war, Ms. Williams said. He played the executioner in "Richard Ill" in 1953 and the Player King in "Hamlet."

His other films included "Jason and the Argonauts," "Cleopatra" and "Sinbad and the Eye of the Tiger."

In the 1960s, Troughton starred in the cult flicks "The Gorgon" and "The Scars of Dracula" for "giggles," Ms. Williams said.

He was content to return to television for "Dr. Who," she said. "He did most of its work in radio and television. He didn't like stage acting; he called it 'shout acting' or something like that."

Ms. Williams said Troughton will be remembered for his modesty, generosity with fans and industriousness. He was proud of his professional diversity titan "just liked to work a lot," she said.