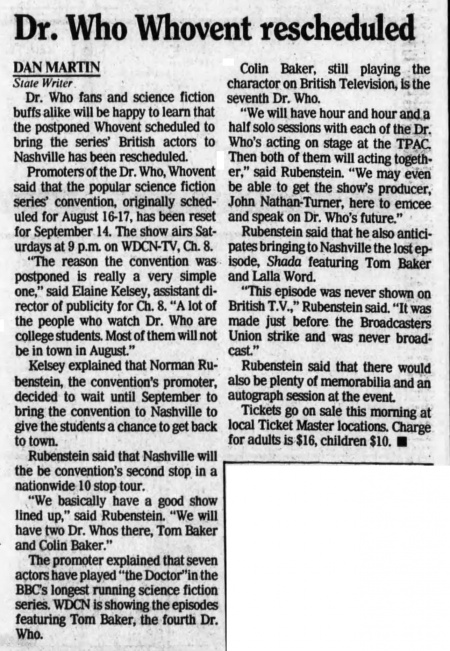 Dr. Who fans and science fiction buffs alike will be happy to learn that the postponed Whovent scheduled to bring the series' British actors to Nashville has been rescheduled.

Promoters of the Dr. Who, Whovent said that the popular science fiction series' convention, originally scheduled for August 16-17, has been reset for September 19. The show airs Saturdays at 9 p.m. on WDCN-TV, Ch. 8.

"The reason the convention was postponed is really a very simple one," said Elaine Kelsey, assistant director of publicity for Ch. 8. "A lot of the people who watch Dr. Who are college students. Most of them will not be in town in August."

Kelsey explained that Norman Rubenstein, the convention's promoter, decided to wait until September to bring the convention to Nashville to give the students a chance to get back to town.

Rubenstein said that Nashville will the be convention's second stop in a nationwide 10 stop tour.

"We basically have a good show lined up," said Rubenstein. "We will have two Dr. Whos there, Tom Baker and Colin Baker."

The promoter explained that seven actors have played "the Doctor" in the BBC's longest running science fiction series. WDCN is showing the episodes featuring Tom Baker, the fourth Dr. Who.

Colin Baker, still playing the charactor on British Television, is the seventh Dr. Who.

"We will have hour and hour and a half solo sessions with each of the Dr. Who's acting on stage at the TPAC. Then both of them will acting together," said Rubenstein. "We may even be able to get the show's producer, John Nathan-Turner, here to emcee and speak on Dr. Who's future."

"This episode was never shown on British T.V.," Rubenstein said. "It was made just before the Broadcasters Union strike and was never broadcast"

Rubenstein said that there would also be plenty of memorabilia and an autograph session at the event.

Tickets go on sale this morning at local Ticket Master locations. Charge for adults is $16, children $10.