Dr. Who adventurer spins off to 'Torchwood' 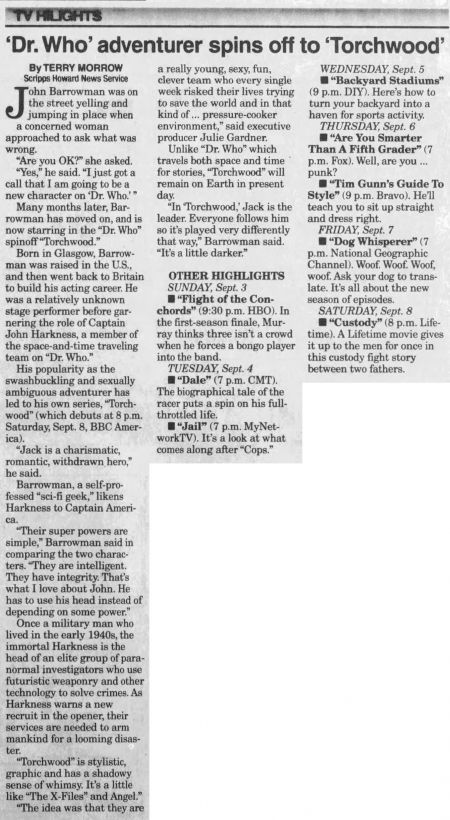 John Barrowman was on the street yelling and jumping in place when a concerned woman approached to ask what was wrong.

Many months later, Barrowman has moved on, and is now starring in the "Dr. Who" spinoff "Torchwood."

Born in Glasgow, Barrowman was raised in the U.S., and then went back to Britain to build his acting career. He was a relatively unknown stage performer before garnering the role of Captain John Harkness, a member of the space-and-time traveling team on "Dr. Who."

His popularity as the swashbuckling and sexually ambiguous adventurer has led to his own series, "Torchwood" (which debuts at 8 p.m. Saturday, Sept. 8, BBC America).

"Jack is a charismatic, romantic, withdrawn hero," he said.

"Their super powers are simple," Barrowman said in comparing the two characters. "They are intelligent. They have integrity. That's what I love about John. He has to use his head instead of depending on some power."

Once a military man who lived in the early 1940s, the immortal Harkness is the head of an elite group of paranormal investigators who use futuristic weaponry and other technology to solve crimes. As Harkness warns a new recruit in the opener, their services are needed to arm mankind for a looming disaster.

"Torchwood" is stylistic, graphic and has a shadowy sense of whimsy. It's a little like "The X-Files" and Angel."

"The idea was that they are a really young, sexy, fun, clever team who every single week risked their lives trying to save the world and in that kind of ... pressure-cooker environment," said executive producer Julie Gardner.

Unlike "Dr. Who" which travels both space and time for stories, "Torchwood" will remain on Earth in present day.

"In 'Torchwood,' Jack is the leader. Everyone follows him so it's played very differently that way," Barrowman said. "It's a little darker."