Dr. Who and the Daleks (Boxoffice) 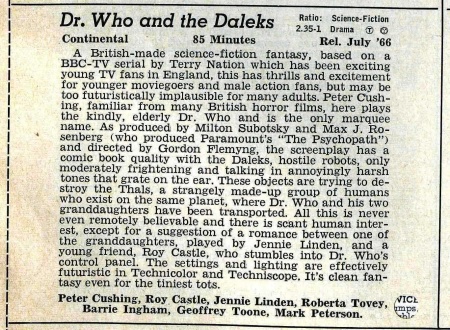 A British-made science-fiction fantasy, based on a BBC-TV serial by Terry Nation which has been exciting young TV fans in England, this has thrills and excitement for younger moviegoers and male action fans, but may be too futuristically implausible for many adults. Peter Cushing, familiar from many British horror films, here plays the kindly, elderly Dr. Who and is the only marquee name. As produced by Milton Subotsky and Max J. Rosenberg (who produced Paramount's "The Psychopath") and directed by Gordon Flemyng, the screenplay has a comic book quality with the Daleks, hostile robots, only moderately frightening and talking in annoyingly harsh tones that grate on the ear. These objects are trying to destroy the Thals, a strangely made-up group of humans who exist on the same planet, where Dr. Who and his two granddaughters have been transported. All this is never even remotely believable and there is scant human interest, except for a suggestion of a romance between one of the granddaughters, played by Jennie Linden, and a young friend, Roy Castle, who stumbles into Dr. Who's control panel. The settings and lighting are effectively futuristic in Technicolor and Techniscope. It's clean fantasy even for the tiniest tots.