Dr. Who and the Hell Planet 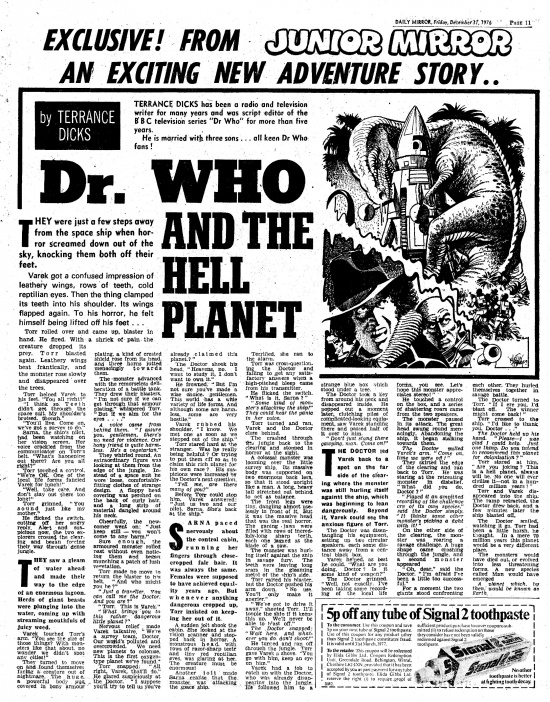 TERRANCE DICKS has been a radio and television writer for many years and was script editor of the B B C television series "Dr Who" for more than five years.

He is married with three sons ... all keen Dr Who-fans!

Dr. Who and the Hell Planet

THEY were just a few steps away from the space ship when horror screamed down out of the sky, knocking them both off their feet.

Varek got a confused impression of leathery wings, rows of teeth, cold reptilian eyes. Then the thing clamped its teeth into, his shoulder. Its wings flapped again. To his horror, he felt himself being lifted off his feet .. .

Torr rolled over and came up, blaster in hand. He fired. With a shriek of pain the creature dropped its prey. Torr blasted again. Leathery wings beat frantically, and the monster rose slowly and disappeared over the trees.

Tarr helped Varek to his feet. You all right?"

"I think so. Teeth didn't get through the space suit. My shoulder's bruised, though."

Sarna, the ship's pilot, had been watching on her vision screen. Her voice crackled from the communicator on Torr's belt. "What's happening, out there? Are you all right?"

Torr touched a control. "We're OK. One of the local life forms fancied Varek for lunch!"

"Well, take care. And don't stay out there too long"

He flicked the switch, cutting off her angry reply. Alert and suspicious now, the two explorers crossed the clearing and began forcing their way through dense jungle.

THEY saw a gleam of water ahead and made their way to the edge of an enormous lagoon. Herds of giant beasts were plunging into the water, coming up with streaming mouthfuls of juicy weed.

Varek touched Torr's arm. "You see the size of those things? With monsters like that about, no wonder we didn't spot any cities!"

They turned to move on and found themselves facing a creature out of nightmare. The huge, a powerful body was covered in bony armour plating, a kind of crested shield rose from its head. and three horns jutted menacingly towards them.

The monster advanced with the remorseless deliberation of a battle tank. They drew their blasters. " I'm not sure if we can get through that armour plating," whispered Torr. "But if we aim for the eyes ...

A voice came from behind them. "I assure you, gentlemen, there's no need for violence. Our bony friend is quite harmless. He's a vegetarian."

They whirled round. An extraordinary figure was looking at them from the edge of the jungle. Instead of a space suit he wore' loose, comfortably-fitting clothes of strange design. A floppy head covering was perched on the back of curly hair, and a long strip of material dangled around his neck.

Cheerfully, the newcomer went on: " Just keep still — you won't come to any harm."

Sure enough, the armoured, monster rolled Past without even noticing them and began munching a patch of lush vegetation.

Torr made no move to return the blaster to his belt. "And who might you be?"

"Just a traveller. You can call me the Doctor. And you are?"

"What brings you to this rather dangerous little planet?"

Nervous relief made Varek talkative. 'We're a survey team, Doctor. Our world's polluted and overcrowded. We need new planets to colonise. This is the first oxygen-type planet we've found."

Torr snapped: "All right, Varek, that'll do." He glared suspiciously at the Doctor. I suppose you'll try to tell us you've already claimed this planet?"

The Doctor shook his head. "Heavens, no. I want to study it, I don't want to own it."

He frowned. " But I'm - not sure you've made a wise choice, gentlemen. This world has a wide variety of life forms. And although some are harmless, some are very hostile."

Varek rubbed his shoulder. "I know. We met one as soon as we stepped out of the ship."

Torr stared hard at the stranger. Was he really being helpful? Or trying to put them off so as to claim this rich Planet for his own race ? .. His suspicions were increased by the Doctor's next question.

Before Torr could stop him, Varek answered: "Just us two and our pilot, Sarna. She's back at the ship."

SARNA paced nervously about the control cabin, running her fingers through close-cropped fair hair. It was always the same. Females were supposed to have achieved equality years ago. But whenever anything dangerous cropped up, Torr insisted on keeping her out of it.

A sudden jolt shook the cabin. She looked at the vision scanner and stepped back in horror. A monstrous head, with rows of razor-sharp teeth and tiny red reptilian eves, was glaring at her. The creature must be enormous!

Another jolt made Sarna realise that the monster was attacking the space ship.

Terrified, she ran to the alarm.

Torr was cross-questioning the Doctor and failing to get any satisfactory answers when a high-pitched bleep came from his transmitter.

He flicked the switch. "What is it, Sarna?"

"Some kind of monster's attacking the ship!" They could hear the panic in her voice.

Torr turned and ran, Varek and the Doctor close behind.

The crashed through the jungle back to the clearing and stooped in horror at the sight.

A colossal monster was looming over the little survey ship. Its massive body was supported on two enormous back legs, so that it stood upright like a man. A long, heavy tail stretched out behind to act as balance.

The front legs were tiny, dangling almost uselessly In front of it. But it was the massive head that was the real horror. The gaping jaws were filled with rows of incredibly-long sharp teeth, each one jagged as the blade of a saw.

The monster was hurling itself against the ship in savage fury. The teeth were leaving long scars in the gleaming metal of the ship's side.

Torr raised his blaster, but the Doctor pushed his arm down. No use. You'll only make it angrier."

"We've got to drive it away," shouted Torr. It'll topple the ship if it keeps this up. We'll never be able to blast off."

The Doctor snapped: "Wait here. And whatever you do, don't shoot!"

He turned and ran off through the jungle. Torr gave Varek a shove. "You go with him, keep an eye on him."

Varek had a job to catch un with the Doctor, who was already disappearing into the jungle. ire' followed him to a strange blue box which stood under a tree.

The Doctor took a key from around his neck and disappeared inside. He popped out a moment later, clutching piles of complicated-looking equipment, saw Varek standing there and passed half of It over to him.

THE DOCTOR led Varek back to a spot on the far side of the clearing where the monster was still hurling itself against the ship, which was beginning to lean dangerously. Beyond it, Varek could see the anxious figure of Torr.

The Doctor was disentangling his equipment, setting up two circular speakers; each some distance away from a central black box.

Varek helped, as best he could. "What are you doing, Doctor? Is it some kind of weapon?"

The Doctor grinned. "Well, not exactly. I've been taking some recording of the local life forms, you see. Let's hope this monster appreciates stereo!"

He touched a control on the box, and a series of shattering roars came from the two speakers.

The monster paused in its attack. The great head swung round menacingly. Abandoning the ship, it began stalking towards them.

The Doctor pulled Varek's arm. "Come on, time we were off!"

They skirted the edge of the clearing and ran back to Torr. He was staring at the retreating monster in disbelief. " What did you do, Doctor?"

"Played it an amplified recording of the challenge cry of its own species." said the Doctor simply. "It thinks some other monster's picking a fight with it!"

On the other side of the clearing, the monster was roaring a savage challenge. A huge shape came crashing through the jungle, and a second monster appeared.

"Oh, dear," said the Doctor. "I'm afraid I've been a little too successful."

For a moment the two giants stood confronting each other. They hurled themselves together in savage battle.

The Doctor turned to Torr. "If I were you, I'd blast off. The winner might come back!"

Torr crossed to the ship. I'd like to thank you, Doctor ..."

The Doctor held up his hand. "Please-I was glad I could help. Just one thing. Do you intend to recommend this planet for colonisation?"

Torr stared at him. "Are you joking? This is a hell planet, always will be. No one will ever civilise it—not in a hundred million years!"

Torr and Varek disappeared into the ship. The ramp retracted, the Doctor drew back, and a few minutes later the ship blasted off.

The Doctor smiled, watching it go. Torr had been a little harsh, he thought. In a mere 70 million years this planet would be a very different place.

The monsters would have died out, or evolved into less threatening forms. A new species called Man would have emerged

A planet which, by then, would be known as Earth.