Dr. Who fans distressed ... series may fade out 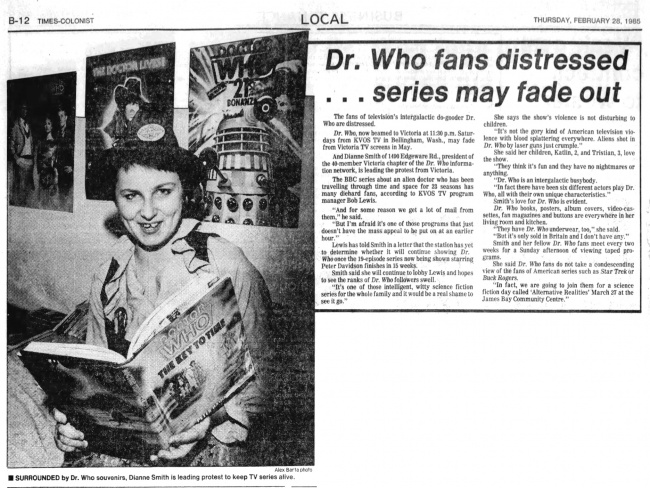 The fans of television's intergalactic do-gooder Dr. Who are distressed.

Dr. Who, now beamed to Victoria at 11:30 p.m. Saturdays from KVOS TV in Bellingham, Wash., may fade from Victoria TV screens in May.

And Dianne Smith of 1490 Edgeware Rd., president of the 40-member Victoria chapter of the Dr. Who information network, is leading the protest from Victoria.

The BBC series about an alien doctor who has been travelling through time and space for 23 seasons has many diehard fans, according to KVOS TV program manager Bob Lewis.

"And for some reason we get a lot of mail from them," he said.

"But I'm afraid it's one of those programs that just doesn't have the mass appeal to be put on at an earlier hour."

Lewis has told Smith in a letter that the station has yet to determine whether it will continue showing Dr. Who once the 19-episode series now being shown starring Peter Davidson finishes in 15 weeks.

Smith said she will continue to lobby Lewis and hopes to see the ranks of Dr. Who followers swell.

"It's one of those intelligent, witty science fiction series for the whole family and it would be a real shame to see it go."

She says the show's violence is not disturbing to children.

"It's not the gory kind of American television violence with blood splattering everywhere. Aliens shot in Dr. Who by laser guns just crumple."

She said her children, Katlin, 2, and Tristian, 3, love the show.

"They think it's fun and they have no nightmares or anything.

"Dr. Who is an intergalactic busybody.

"In fact there have been six different actors play Dr. Who, all with their own unique characteristics."

Smith's love for Dr. Who is evident.

Dr. Who books, posters, album covers, video-cassettes, fan magazines and buttons are everywhere in her living room and kitchen.

"They have Dr. Who underwear, too," she said.

"But it's only sold in Britain and I don't have any."

Smith and her fellow Dr. Who fans meet every two weeks for a Sunday afternoon of viewing taped programs.

She said Dr. Who fans do not take a condescending view of the fans of American series such as Star Trek or Buck Rogers.

"In fact, we are going to join them for a science fiction day called 'Alternative Realities' March 27 at the James Bay Community Centre."