Dr. Who fans get together 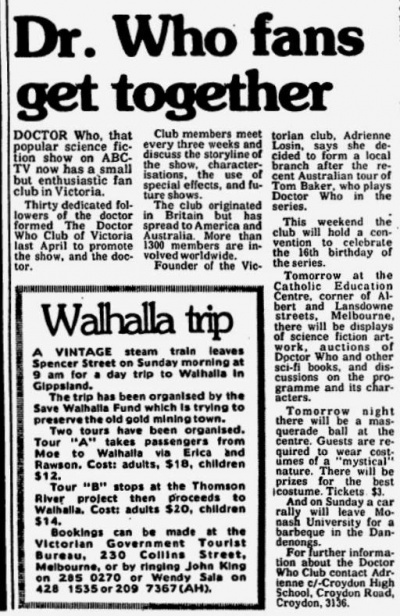 DOCTOR Who, that popular science fiction show on ABC-TV now has a small but enthusiastic fan club in Victoria.

Thirty dedicated followers of the doctor formed The Doctor Who Club of Victoria last April to promote the show, and the doctor.

Club members meet every three weeks and discuss the storyline of the show, characterisations. the use of special effects, and future shows.

The club originated in Britain but has spread to America and Australia More than 1300 members are involved worldwide. Founder of the Victorian club, Adrienne Losin, says she decided to form a local branch after the recent Australian tour of Tom Baker, who plays Doctor Who in the series.

This weekend the club will hold a convention to celebrate the 16th birthday of the series.

Tomorrow at the Catholic Education Centre. corner of Albert and Lansdowne streets, Melbourne, there will be displays of science fiction artwork, auctions of Doctor Who and other sci-fi books, and discussions on the programme and its characters.

Tomorrow night there will be a masquerade ball at the centre. Guests are required to wear costumes of a "mystical" nature. There will be prizes for the best (costume. Tickets $3.

And on Sunday a car rally will leave Monash University for a barbeque in the Dandenongs.