Dr. Who is coming to town this weekend 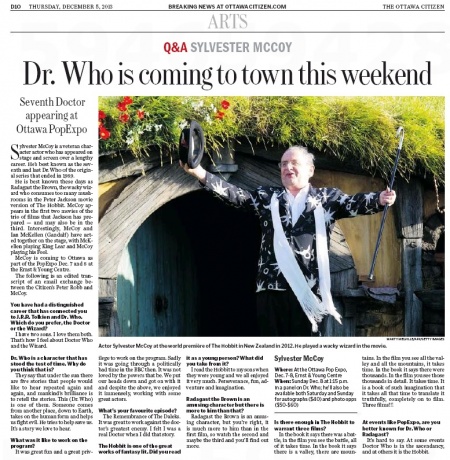 From page D12 Sylvester McCoy is a veteran character actor who has appeared on stage and screen over a lengthy career. He's best known as the seventh and last Dr. Who of the original series that ended in 1989.

MARTY MELVILLE/AFP/GETTY IMAGES Actor Sylvester McCoy at the world première of The Hobbit in New Zealand in 2012. He played a wacky wizard in the movie.

He is best known these days as Radagast the Brown, the wacky wizard who consumes too many mushrooms in the Peter Jackson movie version of The Hobbit. McCoy appears in the first two movies of the trio of films that Jackson has prepared — and may also be in the third. Interestingly, McCoy and Ian McKellen (Gandalf) have acted together on the stage, with McKellen playing King Lear and McCoy playing his Fool.

McCoy is coming to Ottawa as part of the PopExpo Dec. 7 and 8 at the Ernst & Young Centre.

The following is an edited transcript of an email exchange between the Citizen's Peter Robb and McCoy.

You have had a distinguished career that has connected you to J.R.R. Tolkien and Dr. Who. Which do you prefer, the Doctor or the Wizard?

I have two sons. I love them both. That's how I feel about Doctor Who and the Wizard.

Dr. Who is a character that has stood the test of time. Why do you think that is?

They say that under the sun there are five stories that people would like to hear repeated again and again, and mankind's brilliance is to retell the stories. This (Dr. Who) is one of them. Someone comes from another place, down to Earth, takes on the human form and helps us fight evil. He tries to help save us. It's a story we love to hear.

What was it like to work on the program?

It was great fun and a great privilege to work on the program. Sadly it was going through a politically bad time in the BBC then. It was not loved by the powers that be. We put our heads down and got on with it and despite the above, we enjoyed it immensely, working with some great actors.

The Remembrance of The Daleks. It was great to work against the doctor's greatest enemy. I felt I was a real Doctor when I did that story.

The Hobbit is one of the great works of fantasy lit. Did you read it as a young person? What did you take from it?

I read the Hobbit to my sons when they were young and we all enjoyed it very much. Perseverance, fun, adventure and imagination.

Radagast the Brown is an amusing character but there is more to him than that?

Radagast the Brown is an amusing character, but you're right, it is much more to him than in the first film, so watch the second and maybe the third and you'll find out more.

Is there enough in The Hobbit to warrant three films?

At events like PopExpo, are you better known for Dr. Who or Radagast?

It's hard to say. At some events Doctor Who is in the ascendancy, and at others it is the Hobbit.