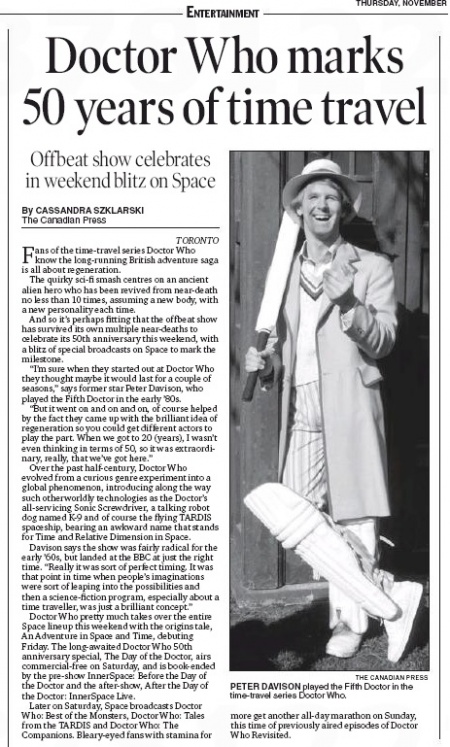 Fans of the time-travel series Doctor Who know the long-running British adventure saga is all about regeneration.

The quirky sci-fi smash centres on an ancient alien hero who has been revived from near-death no less than 10 times, assuming a new body, with a new personality each time.

And so it's perhaps fitting that the offbeat show has survived its own multiple near-deaths to celebrate its 50th anniversary this weekend, with a blitz of special broadcasts on Space to mark the milestone.

"I'm sure when they started out at Doctor Who they thought maybe it would last for a couple of seasons," says former star Peter Davison, who played the Fifth Doctor in the early '80s.

"But it went on and on and on, of course helped by the fact they came up with the brilliant idea of regeneration so you could get different actors to play the part. When we got to 20 (years), I wasn't even thinking in terms of 50, so it was extraordinary, really, that we've got here."

Over the past half-century, Doctor Who evolved from a curious genre experiment into a global phenomenon, introducing along the way such otherworldly technologies as the Doctor's all-servicing Sonic Screwdriver, a talking robot dog named K-9 and of course the flying TARDIS spaceship, bearing an awkward name that stands for Time and Relative Dimension in Space.

Davison says the show was fairly radical for the early '60s, but landed at the BBC at just the right time. "Really it was sort of perfect timing. It was that point in time when people's imaginations were sort of leaping into the possibilities and then a science-fiction program, especially about a time traveller, was just a brilliant concept."

Later on Saturday, Space broadcasts Doctor Who: Best of the Monsters, Doctor Who: Tales from the TARDIS and Doctor Who: The Companions. Bleary-eyed fans with stamina for more get another all-day marathon on Sunday, this time of previously aired episodes of Doctor Who Revisited.