Dr. Who movie is charming look at series creation 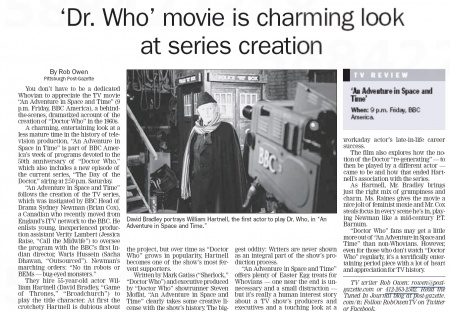 A charming, entertaining look at a less mature time in the history of television production, "An Adventure in Space in Time" is part of BBC America's week of programs devoted to the 50th anniversary of "Doctor Who," which also includes a new episode of the current series, "The Day of the Doctor," airing at 2:50 p.m. Saturday.

"An Adventure in Space and Time" follows the creation of the TV series, which was instigated by BBC Head of Drama Sydney Newman (Brian Cox), a Canadian who recently moved from England's ITV network to the BBC. He enlists young, inexperienced production assistant Verity Lambert (Jessica Raise, "Call the Midwife") to oversee the program with the BBC's first Indian director, Waris Hussein (Sacha Dhawan, "Outsourced"). Newman's marching orders: "No tin robots or BEMs — bug-eyed monsters."

They hire 55-year-old actor William Hartnell (David Bradley, "Game of Thrones," "Broadchurch") to play the title character. At first the crotchety Hartnell is dubious about the project, but over time as "Doctor Who" grows in popularity, Hartnell becomes one of the show's most fervent supporters.

Written by Mark Gatiss ("Sherlock," "Doctor Who") and executive produced by "Doctor Who" showrunner Steven Moffat, "An Adventure in Space and Time" clearly takes some creative license with the show's history. The biggest oddity: Writers are never shown as an integral part of the show's production process.

"An Adventure in Space and Time" offers plenty of Easter Egg treats for Whovians — one near the end is unnecessary and a small distraction — but it's really a human interest story about a TV show's producers and executives and a touching look at a workaday actor's late-in-life career success.

The film also explores how the notion of the Doctor "re-generating" — to then be played by a different actor — came to be and how that ended Hartnell's association with the series.

As Hartnell, Mr. Bradley brings just the right mix of grumpiness and charm. Ms. Raines gives the movie a nice jolt of feminist moxie and Mr. Cox steals focus in every scene he's in, playing Newman like a mid-century P.T. Barnum.

"Doctor Who" fans may get a little more out of "An Adventure in Space and Time" than non-Whovians. However, even for those who don't watch "Doctor Who" regularly, it's a terrifically entertaining period piece with a lot of heart and appreciation for TV history.