Dr. Who sets-- 'not Ministry's fault' 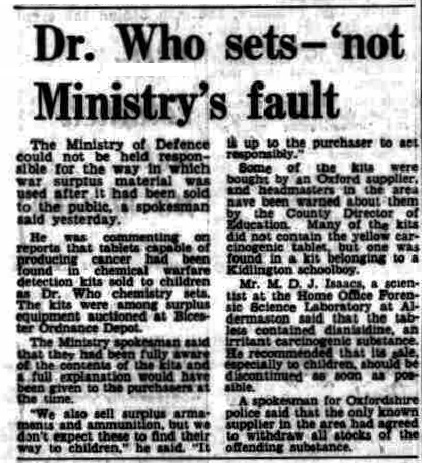 The Ministry of Defence could not be held responsible for the way in which war surplus material was used after it had been sold to the public, a spokesman said today.

He was commenting on reports that tablets capable of producing cancer had been found in chemical warfare detection kits sold to children as Dr. Who chemistry sets. The kits were among surplus equipment auctioned at Bicester Ordinance Depot.

The Ministry spokesman said that they had been fully aware of the contents of the kits and a full explanation would have been hiven to purchasers at the time.

"We also sell surplus armaments and ammunition, but we don't expect these to find their way to children," he said. "It is up to the purchaser to act responsibly."

Some of the kits were bought by and Oxfordshire supplier, and headmasters in the area have been warned about them by the County Director of Education. Many of the kits did not contain the yellow carcinogenic tablet, but one was found in the kit belonging to a Kidlington schoolboy.

Mr. M. D. J. Isaacs, a scientist at the Home Office Forensic Science Laboratory at Aldermaston said that the tablets contained dianisidine, an irritant carcinogenics substance. He recommends did that its sale, especially to children, should be discontinued as soon as possible.

A spokesman for Oxfordshire police said that the only known supplier in the area had agreed to withdraw all all stocks of the offending substance.