Dr. Who stays on 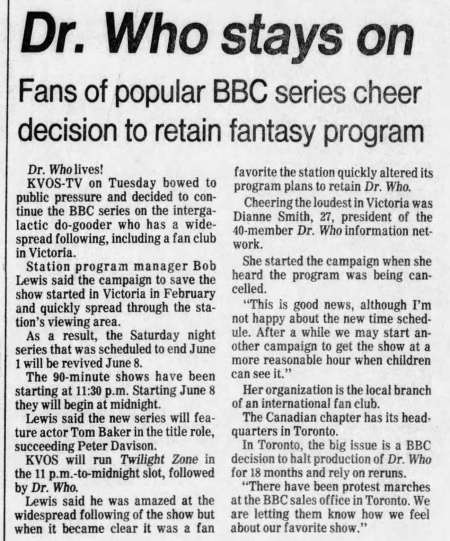 KVOS-TV on Tuesday bowed to public pressure and decided to continue the BBC series on the intergalactic do-gooder who has a widespread following, including a fan club in Victoria.

Station program manager Bob Lewis said the campaign to save the show started in Victoria in February and quickly spread through the station's viewing area.

As a result, the Saturday night series that was scheduled to end June 1 will be revived June 8.

The 90-minute shows have been starting at 11:30 p.m. Starting June 8 they will begin at midnight.

KVOS will run Twilight Zone in the 11 p.m.-to-midnight slot, followed by Dr. Who.

Lewis said he was amazed at the widespread following of the show but when it became clear it was a fan favorite the station quickly altered its program plans to retain Dr. Who.

Cheering the loudest in Victoria was Dianne Smith, 27, president of the 40-member Dr. Who information network.

She started the campaign when she heard the program was being cancelled.

"This is good news, although I'm not happy about the new time schedule. After a while we may start another campaign to get the show at a more reasonable hour when children can see it."

Her organization is the local branch of an international fan club.

The Canadian chapter has its headquarters in Toronto.

In Toronto, the big issue is a BBC decision to halt production of Dr. Who for 18 months and rely on reruns.

"There have been protest marches at the BBC sales office in Toronto. We are letting them know how we feel about our favorite show."