Dr. Who to regenerate himself in Knoxville 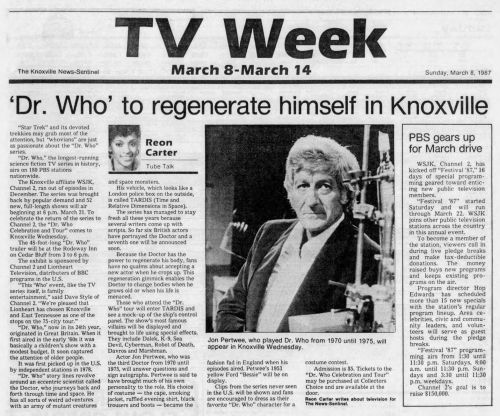 "Star Trek" and its devoted trekkies may grab most of the attention, but 'Whovians" are just as passionate about the "Dr. Who" series.

The Knoxville affiliate WSJK, Channel 2, ran out of episodes in December. The series was brought back by popular demand and 52 new, full-length shows will air beginning at 6 p.m. March 21. To celebrate the return of the series to Channel 2, the "Dr. Who Celebration and Tour" comes to Knoxville Wednesday.

The exhibit is sponsored by Channel 2 and Lionheart Television, distributers of BBC programs in the U.S.

"This 'Who' event, like the TV series itself, is family entertainment," said Dave Style of Channel 2. "We're pleased that Lionheart has chosen Knoxville and East Tennessee as one of the stops on the 75-city tour."

"Dr. Who," now in its 24th year, originated in Great Britain. When it first aired in the early '60s it was basically a children's show with a modest budget. It soon captured the attention of older people.

It was first picked up in the U.S. by independent stations in 1978.

"Dr. Who" story lines revolve around an eccentric scientist called the Doctor, who journeys back and forth through time and space. He has all sorts of weird adventures with an army of mutant creatures and space monsters.

His vehicle, which looks like a London police box on the outside, is called TARDIS (Time and Relative Dimensions in Space).

The series has managed to stay fresh all these years because several writers come up with scripts. So far six British actors have portrayed the Doctor and a seventh one will be announced soon.

Because the Doctor has the power to regenerate his body, fans have no qualms about accepting a new actor when he crops up. This regeneration gimmick enables the Doctor to change bodies when he grows old or when his life is menaced.

Those who attend the "Dr. Who" tour will enter TARDIS and see a mock-up of the ship's control panel. The show's most famous villains will be displayed and brought to life using special effects. They include Dalek, K-9, Sea Devil, Cyberman, Robot of Death, Davros and Marshman.

Actor Jon Pertwee, who was the third Doctor from 1970 until 1975, will answer questions and sign autographs. Pertwee is said to have brought much of his own personality to the role. His choice of costume — the cape, smoking jacket, ruffled evening shirt, black trousers and boots — became the fashion fad in England when his episodes aired. Pertwee's 1953 yellow Ford "Bessie" will be on display.

Clips from the series never seen in the U.S. will be shown and fans are encouraged to dress as their favorite "Dr. Who" character for a costume contest.

Admission is $5. Tickets to the "Dr. Who Celebration and Tour" may be purchased at Collectors Choice and are available at the door.

Aeon Carter writes about television for The News-Sentinel.

PBS gears up for March drive

Caption: Jon Pertwee, who played Dr. Who from 1970 until 1975, will appear in Knoxville Wednesday.