Dr. Who vs. the gender gap 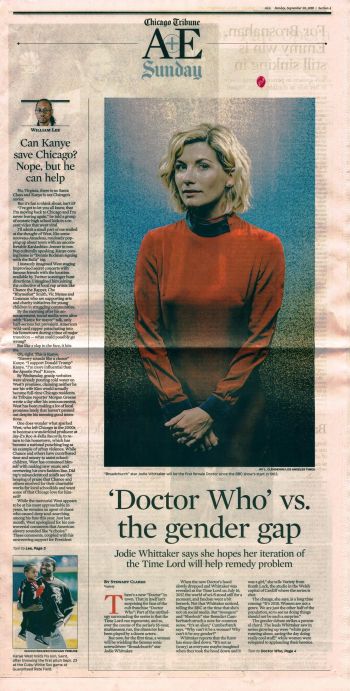 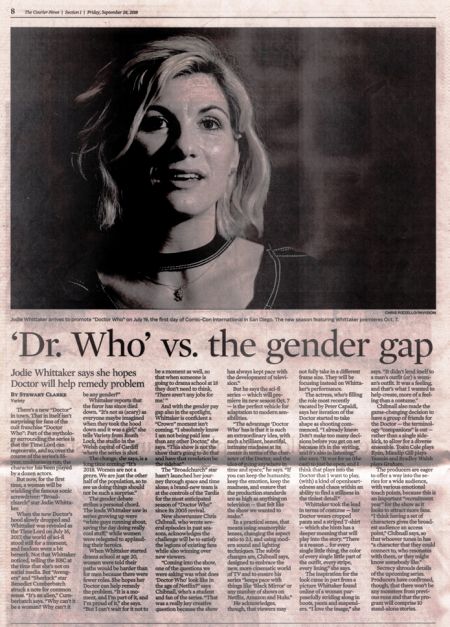 There's a new "Doctor" in town. That in itself isn't surprising for fans of the cult franchise "Doctor Who": Part of the mythology surrounding the series is that the Time Lord can regenerate, and so, over the course of the series's 55-year, multiseason run, the character has been played by a dozen actors.

But now, for the first time, a woman will be wielding the famous sonic screwdriver: "Broadchurch" star Jodie Whittaker.

When the new Doctor's hood slowly dropped and Whittaker was revealed as the Time Lord on July 16, 2017, the world of sci-fi stood still for a moment, and fandom went a bit berserk. Not that Whittaker noticed, telling the BBC at the time that she's not on social media. But "Avengers" and "Sherlock" star Benedict Cumberbatch struck a note for common sense. "It's an alien," Cumberbatch says. "Why can't it be a woman? Why can't it be any gender?"

Whittaker reports that the furor has since died down. "It's not as (scary) as everyone maybe imagined when they took the hood down and it was a girl," she tells Variety from Roath Lock, the studio in the Welsh capital of Cardiff where the series is shot.

The change, she says, is a long time coming: "It's 2018. Women are not a genre. We are just the other half of the population, so to see us doing things should not be such a surprise."

The gender debate strikes a personal chord. The leads Whittaker saw in series growing up were "white guys running about, saving the day doing really cool stuff," while women were relegated to applauding their heroics.

When Whittaker started drama school at age 20, women were told their paths would be harder than for men because there were fewer roles. She hopes her Doctor can help remedy the problem. "It is a moment, and I'm part of it, and I'm proud of it," she says. "But I can't wait for it not to be a moment as well, so that when someone is going to drama school at 18 they don't need to think, 'There aren't any jobs for me.' "

And with the gender pay gap also in the spotlight, Whittaker is confident a "Crown" moment isn't coming. "I absolutely know I am not being paid less than any other Doctor," she says. "This show is not the show that's going to do that and have that revelation be the sidebar."

The "Broadchurch" star hasn't launched her journey through space and time alone; a brand-new team is at the controls of the Tardis for the most anticipated season of "Doctor Who" since its 2005 revival.

New showrunner Chris Chibnall, who wrote several episodes in past seasons, acknowledges the challenge will be to satisfy the legions of existing fans while also winning over new viewers.

"Coming into the show, one of the questions we were asking was what does 'Doctor Who' look like in the age of Netflix?" says Chibnall, who's a student and fan of the series. "That was a really key creative question because the show has always kept pace with the development of television."

But he says the sci-fi series - which will premiere its new season Oct. 7 - is the perfect vehicle for adaptation to modern sensibilities.

"The advantage 'Doctor Who' has is that it is such an extraordinary idea, with such a brilliant, beautiful, intimate madness at its center in terms of the character of the Doctor, and the idea of going anywhere in time and space," he says. "If you can keep the humanity, keep the emotion, keep the madness, and ensure that the production standards are as high as anything on television - that felt like the show we wanted to make."

In a practical sense, that means using anamorphic lenses, changing the aspect ratio to 2:1, and using modern sound and lighting techniques. The subtle changes are, Chibnall says, designed to embrace the new, more cinematic world of TV and to ensure his series "keeps pace with things like 'Black Mirror' or any number of shows on Netflix, Amazon and Hulu."

He acknowledges, though, that viewers may not fully take in a different frame size. They will be focusing instead on Whittaker's performance.

The actress, who's filling the role most recently vacated by Peter Capaldi, says her iteration of the Doctor started to take shape as shooting commenced. "I already knew: Don't make too many decisions before you get on set because it's in the writing, and it's also in listening," she says. "It was for us (the cast) to just be open, and I think that plays into the Doctor that I want to play, (with) a kind of openheartedness and chaos within an ability to find a stillness in the tiniest detail."

Whittaker took the lead in terms of costume - her Doctor wears cropped pants and a striped T-shirt - which she hints has a deeper meaning that will play into the story. "There is a reason ... for every single little thing, the color of every single little part of the outfit, every stripe, every lining," she says.

The inspiration for the look came in part from a picture Whittaker found online of a woman purposefully striding along in boots, pants and suspenders. "I love the image," she says. "It didn't lend itself to a man's outfit (or) a woman's outfit. It was a feeling, and that's what I wanted to help create, more of a feeling than a costume."

Chibnall also made the game-changing decision to have a group of friends for the Doctor - the terminology "companions" is out - rather than a single sidekick, to allow for a diverse ensemble. Tosin Cole plays Ryan, Mandip Gill plays Yasmin and Bradley Walsh plays Graham.

The producers are eager to offer a way into the series for a wide audience, with various emotional touch points, because this is an important "recruitment year" for the show as it looks to attract more fans. "I think having a set of characters gives the broadest audience an access point," Chibnall says, so that whoever tunes in has "a character that they could connect to, who resonates with them, or they might know somebody like."

Secrecy shrouds details of the upcoming series. Producers have confirmed, though, that there won't be any monsters from previous runs and that the program will comprise 10 stand-alone stories.