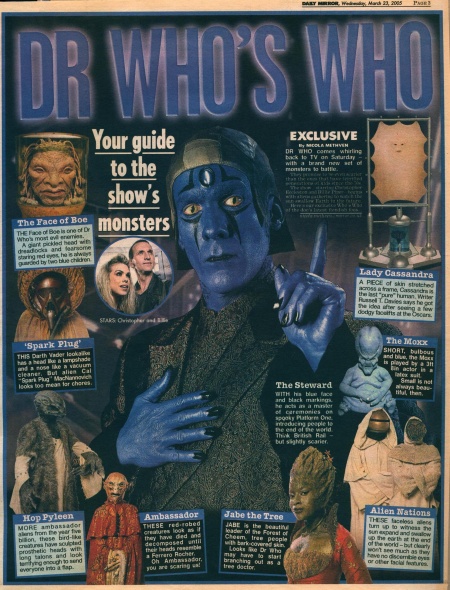 Your guide to the show's monsters

DR WHO comes whirling back to TV on Saturday with a brand new set of monsters to battle.

They promise to be even scarier than the ones that have terrified generations of kids since the 70s.

The show - starring Christopher Eccleston and Billie Piper - begins with aliens gathering to watch the sun swallow Earth in the future.

Here's our exclusive Who's Who of the doc's latest fiendish foes ...

The Face of Boe

THE Face of Boe is one of Dr Who's most evil enemies.

A giant pickled head with dreadlocks and fearsome staring red eyes, he is always guarded by two blue children.

THIS Darth Vader lookalike has a head like a lampshade and a nose like a vacuum cleaner. But alien Cal "Spark Plug" MacNannovich looks too mean for chores.

MORE ambassador aliens from the year five billion, these bird-like creatures have sculpted prosthetic heads with long talons and look terrifying enough to send everyone into a flap.

THESE red-robed creatures look as if they have died an decomposed untiltheir heads resemble a Ferrero Rocher. Oh Ambassador. you are scaring us!

JABE is the beautiful leader of the Forest of Cheem, tree people with bark-covered skin.

WITH his blue face and black markings. he acts as a master of ceremonies on spooky Platform One. introducing people to the end of the world. Think British Rail but slightly scarier.

A PIECE of skin stretched across a frame, Cassandra is the last "pure" human. Writer Russell T. Davies says he got the idea after seeing a few dodgy facelifts at the Oscars.

SHORT, bulbous and blue, the Moxx is played by a 3ft 8in actor in a latex suit. Small is not always beautiful, then.

Looks like Dr Who may have to start branching out as a tree doctor. THESE faceless aliens turn up to witness the sun expand and swallow up the earth at the end of the world — but clearly won't see much as they have no discernible eyes or other facial features.