Dr Who? I can hypnotise myself, says the Professor 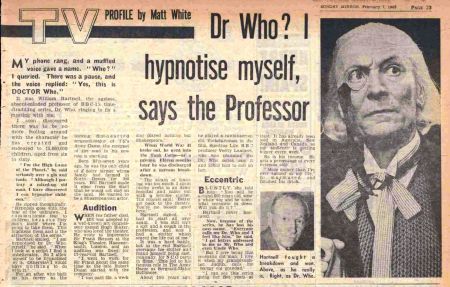 MY phone rang, and a muffled voice gave a name. " Who? " I queried. There was a pause, and the voice replied: "Yes, this is DOCTOR Who."

It, was William Hartnell. the ageless, absent-minded professor of BBC-1's time-straddling series, Dr. Who, ringing to fix meeting with me.

I soon discovered there was to be no more fooling around with the character he has created and endeared to 15,000.000 children, aged from six to sixty.

I'm the High Lama of the Planet," he said seriously over a gin and tonic, "Although I portray a mixed-up old man. I have discovered I can hypnotise children.

He sipped thoughtfully. Hypnosis goes with the fear of the unknown. I communicate fear to children because they don't know where I'm going to take them. This frightens them and is the attraction of the series."

Hartnell smiled. "I am hypnotised by Dr. Who myself," he said. " When I look at a script I find it unbelievable. So I allow myself to be hypnotised by it. Otherwise I would have nothing to do with it."

For an actor who built up his career as the barking, flint-hearted sergeant-major of TV's Army Game, the contrast of the man in his new role is startling.

Born fifty-seven years ago, he was the only child of a dairy farmer whose family had farmed in North Devon for 300 years. B111 Hartnell made it clear from the start that he would not stay on the land. He wanted to be a Shakespearean actor.

WHEN his father died, Bill was adopted by a well-known art councils-seer named Hugh Maker, who also loved the theatre. He wrote to impresario Sir Frank Benson at the King's Theatre, Hammersmith, London, and an audition was fixed for 17-year-old Hartnell.

"I went to work for Sir Frank about the same time as the late Robert Donal started with the company.

"I was paid 25s. a week and played nothing but Shakespeare."

When World War II broke out, he went into the tank Corps—as a private. Eleven month, later he was discharged after a nervous breakdown.

Hartnell sighed. 'I had to start all over again. I was still only a spit and a cough in the profesion, and now I had a stutter which scared the life out of me."

It was a bard battle, but in the end Hartnell overcame his stutter and found himself being cast, ironically, for NCO parts in films. This led to his famous role in The Army Game as Sergeant-Major Bullimore.

About two years ago he played a cantankerous old Yorkshireman in the film, Sporting Life. B B C producer Verity Lambert, who was planning the Dr. Who series, saw it and asked him to call on her.

BLUNTLY, she told him: "You will be around 600 years old, wear a white wig and be somewhat eccentric in dress. Will you do it?"

Now, because of the series, he has lost his own name., Everyone calls me Dr. Who and I feel like him," he said. "I get letters addressed to me as Mr. Who and even Uncle Who.

"But I love being this eccentric old man. I love it when my, granddaughter, Judith, calls me 'barmy old grandad.'

"I can see this series going for five years at least. It has already been sold in Australia, New Zealand and Canada, so audience is getting bigger every week.

Caption: Hartnell fought a breakdown and won. Above, as he really is. Right, as Dr. Who.