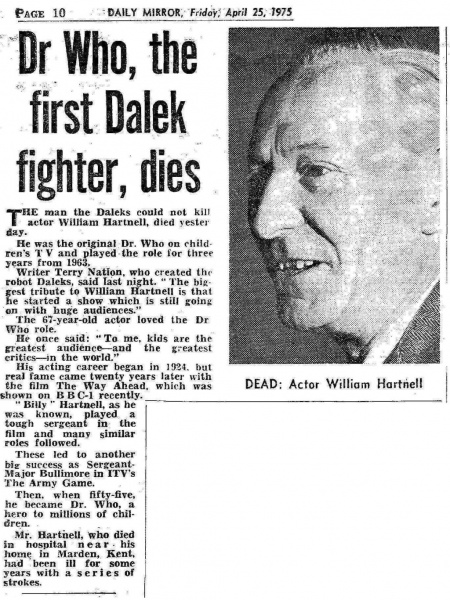 THE man the Daleks could not kill actor William Hartnell, died yesterday.

He was the original Dr. Who on children's T V and played the role for three years from 1963.

Writer Terry Nation, who created the robot Daleks, said last night. "The biggest tribute to William Hartnell is that he started a show which is still going on with huge audiences."

The 67-year-old actor loved the Dr Who role. He once said: "To me, kids are the greatest audience—and the greatest critics—in the world."

His acting career began in 1924 but real fame came twenty years later with the film The Way Ahead, which was shown on B B C-1 recently.

"Billy" Hartnell, as he was known, played a tough sergeant in the film and many similar roles followed.

These led to another big success as Sergeant-Major Bullimore in ITV's The Army Game. Then, when fifty-five, he became Dr. Who, a hero to millions of children.

Mr. Hartell, who died in hospital near his home in Marden, Kent, had been ill for some years with a series of strokes.