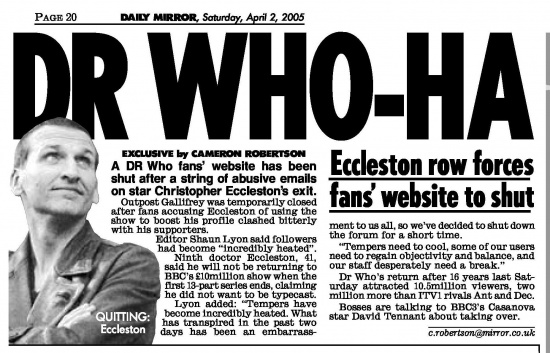 A DR Who fans' website has been shut after a string of abusive emails on star Christopher Eccleston's exit.

Outpost Gallifrey was temporarily closed after fans accusing Eccleston of using the show to boost his profile clashed bitterly with his supporters.

Ninth doctor Eccleston, 41, said he will not be returning to BBC's £10 million show when the first 13-part series ends, claiming he did not want to be typecast.

Lyon added: "Tempers have become incredibly heated. What has transpired in the past two days has been an embarrassment to us all, so we've decided to shut down the forum for a short time.

"Tempers need to cool, some of our users need to regain objectivity and balance, and our staff desperately need a break."

Bosses are talking to BBC3's Casanova star David Tennant about taking over.