Dr Who: The Videos 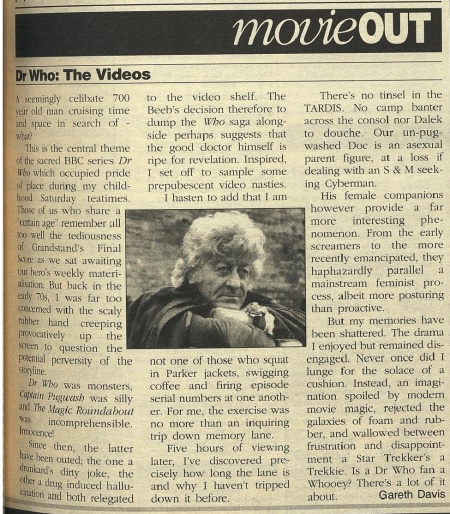 A seemingly celibate 700 year old man cruising time and space in search of what?

This is the central theme of the sacred BBC series Dr Who which occupied pride of place during my childhood Saturday teatimes. Those of us who share a 'certain age' remember all too well the tediousness of Grandstand's Final Score as we sat awaiting our hero's weekly materialisation. But back in the early 70s, I was far too concerned with the scaly rubber hand creeping provocatively up the street to question the potential perversity of the storyline.

Dr Who was monsters, Captain Pugwash was silly and The Magic Roundabout was incomprehensible. Innocence!

Since then, the latter have been outed the one a drunkard's dirty joke, the other a drug induced hallucination and both relegated to the video shelf. The Beeb's decision therefore to dump the Who saga alongside perhaps suggests that the good doctor himself is ripe for revelation. Inspired, I set off to sample some prepubescent video nasties.

I hasten to add that I am not one of those who squat in Parker jackets, swigging coffee and firing episode serial numbers at one another. For me, the exercise was no more than an inquiring trip down memory lane.

Five hours of viewing later, I've discovered precisely how long the lane is and why I haven't tripped down it before.

There's no tinsel in the TARDIS. No camp banter across the consol nor Dalek to douche. Our un-pug-washed Doc is an asexual parent figure, at a loss if dealing with an S & M seeking Cyberman.

His female companions however provide a far more interesting phenomenon. From the early screamers to the more recently emancipated, they haphazardly parallel a mainstream feminist process, albeit more posturing than proactive.

But my memories have been shattered. The drama I enjoyed but remained disengaged. Never once did I lunge for the solace of a cushion. Instead, an imagination spoiled by modern movie magic, rejected the galaxies of foam and rubber, and wallowed between frustration and disappointment a Star Trekker's a Trekkie. Is a Dr Who fan a Whooey? There's a lot of it about.