Dr Who: he really is invincible 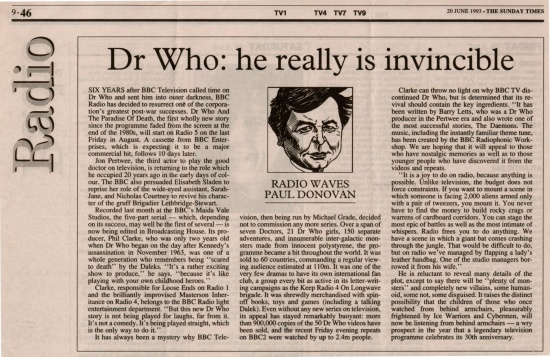 SIX YEARS after BBC Television called time on Dr Who and sent him into outer darkness, BBC Radio has decided to resurrect one of the corporation's greatest post-war successes. Dr Who And The Paradise Of Death, the first wholly new story since the programme faded from the screen at the end of the 1980s, will start on Radio 5 on the last Friday in August. A cassette from BBC Enterprises, which is expecting it to be a major commercial hit, follows 10 days later.

Jon Pertwee, the third actor to play the good doctor on television, is returning to the role which he occupied 20 years ago in the early days of colour. The BBC also persuaded Elisabeth Sladen to reprise her role of the wide-eyed assistant, Sarah-Jane, and Nicholas Courtney to revive his character of the gruff Brigadier Lethbridge-Stewart.

Recorded last month at the BBC's Maida Vale Studios, the five-part serial — which, depending on its success, may well be the first of several — is now being edited in Broadcasting House. Its producer, Phil Clarke, who was only two years old when Dr Who began on the day after Kennedy's assassination in November 1963, was one of a whole generation who remembers being "scared to death" by the Daleks. "It's a rather exciting show to produce," he says, "because it's like playing with your own childhood heroes."

Clarke, responsible for Loose Ends on Radio 1 and the brilliantly improvised Masterson Inheritance on Radio 4, belongs to the BBC Radio light entertainment department. "But this new Dr Who story is not being played for laughs, far from it. It's not a comedy. It's being played straight, which is the only way to do it."

It has always been a mystery why BBC Television, then being run by Michael Grade, decided not to commission any more series. Over a span of seven Doctors, 21 Dr Who girls, 150 separate adventures, and innumerable inter-galactic monsters made from innocent polystyrene, the programme became a hit throughout the world. It was sold to 60 countries, commanding a regular viewing audience estimated at 110m. It was one of the very few dramas to have its own international fan club, a group every bit as active in its letter-writing campaigns as the Keep Radio 4 On Longwave brigade. It was shrewdly merchandised with spinoff books, toys and games (including a talking Dalek). Even without any new series on television, its appeal has stayed remarkably buoyant: more than 900,000 copies of the 50 Dr Who videos have been sold, and the recent Friday evening repeats on BBC2 were watched by up to 2.4m people.

Clarke can throw no light on why BBC TV discontinued Dr Who, but is determined that its revival should contain the key ingredients. "It has been written by Barry Letts, who was a Dr Who producer in the Pertwee era and also wrote one of the most successful stories, The Daemons. The music, including the instantly familiar theme tune, has been created by the BBC Radiophonic Workshop. We are hoping that it will appeal to those who have nostalgic memories as well as to those younger people who have discovered it from the videos and repeats.

"It is a joy to do on radio, because anything is possible. Unlike television, the budget does not force constraints. If you want to mount a scene in which someone is facing 2,000 aliens armed only with a pair of tweezers, you mount it. You never have to find the money to build rocky crags or warrens of cardboard corridors. You can stage the most epic of battles as well as the most intimate of whispers. Radio frees you to do anything. We have a scene in which a giant bat comes crashing through the jungle. That would be difficult to do, but on radio we've managed by flapping a lady's leather handbag. One of the studio managers borrowed it from his wife."

He is reluctant to reveal many details of the plot, except to say there will be "plenty of monsters" and completely new villains, some humanoid, some not, some disguised. It raises the distinct possibility that the children of those who once watched from behind armchairs, pleasurably frightened by Ice Warriors and Cybermen, will now be listening from behind armchairs — a wry prospect in the year that a legendary television programme celebrates its 30th anniversary.