Dr Who & the Xmas Special 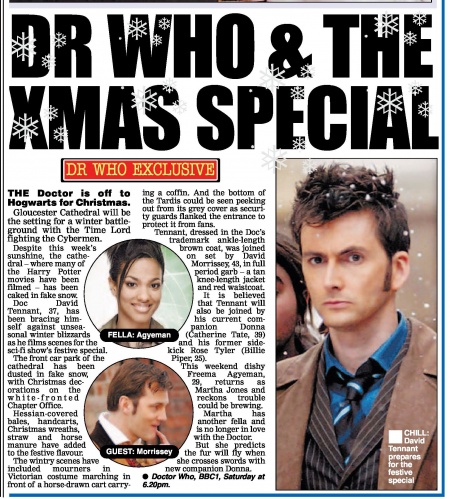 THE Doctor is off to Hogwarts for Christmas.

Gloucester Cathedral will be the setting for a winter battleground with the Time Lord fighting the Cybermen. Despite this week's sunshine, the cathedral — where many of the Harry Potter movies have been filmed — has been caked in fake snow.

Doc David Tennant, 37, has been bracing himself against unseasonal winter blizzards as he films scenes for the sci-fi show's festive special. The front car park of the cathedral has been dusted in fake snow, with Christmas decorations on the white-fronted Chapter Office. Hessian-covered bales, handcarts, Christmas wreaths, straw and horse manure have added to the festive flavour. The wintry scenes have included mourners in Victorian costume marching in front of a horse-drawn cart carrying a coffin. And the bottom of the Tardis could be seen peeking out from its grey cover as security guards flanked the entrance to protect it from fans.

It is believed that Tennant will also be joined by his current companion Donna (Catherine Tate, 39) and his former sidekick Rose Tyler (Billie Piper, 25).

This weekend dishy Freema Agyeman, 29, returns as Martha Jones and reckons trouble could be brewing.

Martha has another fella and is no longer in love with the Doctor. But she predicts the fur will fly when she crosses swords with new companion Donna.