Dr Who — he changed my life 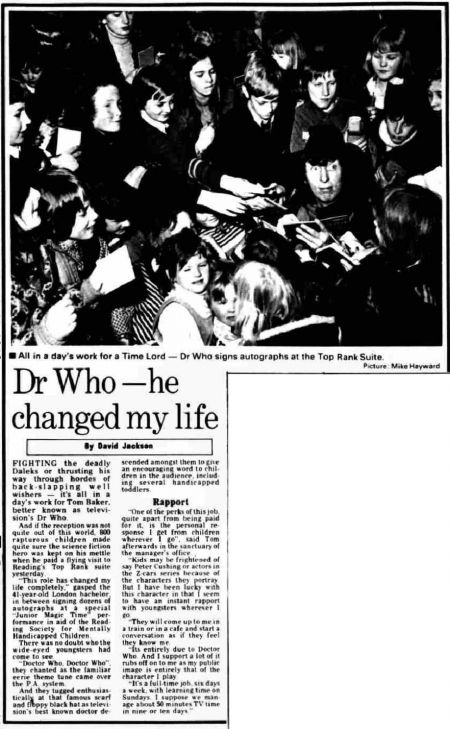 FIGHTING the deadly Daleks or thrusting his way through hordes of back-slapping well wishers it's all in a day's work for Tom Baker, better known as television's Dr Who.

And if the reception was not quite out of this world, 800 rapturous children made quite sure the science fiction hero was kept on his mettle when he paid a flying visit to Reading's Top Rank suite yesterday.

"This role has changed my life completely." gasped the 41-year-old London bachelor, in between signing dozens of autographs at a special "Junior Magic Time" performance in aid of the Reading Society for Mentally Handicapped Children.

There was no doubt who the wide-eyed youngsters had come to see.

"Doctor Who, Doctor Who", they chanted as the familiar eerie theme tune came over the P.A. system.

And they tugged enthusiastically at that famous scarf and floppy black hat as television's best known doctor descended amongst them to give an encouraging word to children in the audience, including several handicapped toddlers.

"One of the perks of this job, quite apart from being paid for it, is the personal response I get from children wherever I go", said Tom afterwards in the sanctuary of the manager's office.

"Kids may he frightened of say Peter Cushing or actors in the Z-cars series because of the characters they portray. But I have been lucky with this character in that I seem to have an instant rapport with youngsters wherever I go.

"They will come up to me in a train or in a cafe and start a conversation as if they feel they know me.

"It's entirely due to Doctor Who. And I support a lot of it rubs off on to me as my public image is entirely that of the character I play.

"It's a full-time job, six days a week, with learning time on Sundays. I suppose we manage about 50 minutes TV time in nine or ten days."

Caption: All in a day's work for a Time Lord - Dr Who signs autographs at the Top Rank Suite