Dr Who axed in plot by the BBC 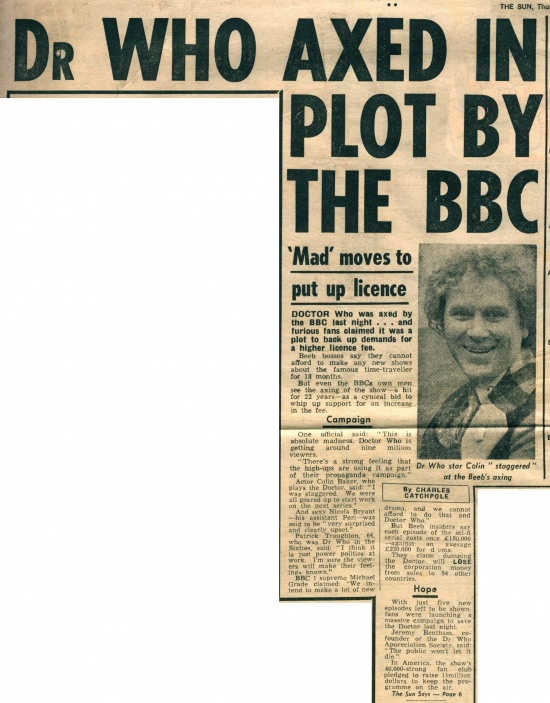 'Mad' moves to put up licence

DOCTOR Who was axed by the BBC last night ... and furious fans claimed it was a plot to back up demands for a higher licence fee.

Beeb bosses say they cannot afford to make any new shows about the famous time-traveller for 18 months.

But even the BBCs own men see the axing of the show—a hit for 22 years--as a cynical bid to whip up support for an increase in the fee.

One official said: "This is absolute madness. Doctor Who is getting around nine million viewers.

"There's a strong feeling that the high-ups are using it as part of their propaganda campaign."

Actor Colin Baker, who plays the Doctor, Said: "I was staggered. We were all geared up to start work on the next series."

And sexy Nicola Bryant —his assistant Peri—was said to be "very surprised and clearly upset."

Patrick Troughton, 64, who was Dr Who in the Sixties, said: "I think it is just power politics at work. I'm sure the viewers will make their feelings known."

BBC 1 supremo Michael Grade claimed: "We intend to make a lot of new drama, and we cannot afford to do that and Doctor Who."

They claim dumping the Doctor will LOSE the corporation money from sales to 54 other countries.

With just five new episodes left to be shown-fans were launching a massive campaign to save the Doctor last night.

Jeremy Bentham, cofounder of the Dr Who Appreciation Society, said: The public won't let it die."

In America, the show's 40.000-strong fan club pledged to raise 1 1/2 million dollars to keep the programme on the air.

Caption: Dr Who star Colin " staggered 11 at the Beeb's axing