Dr Who confronts the deadly Daleks 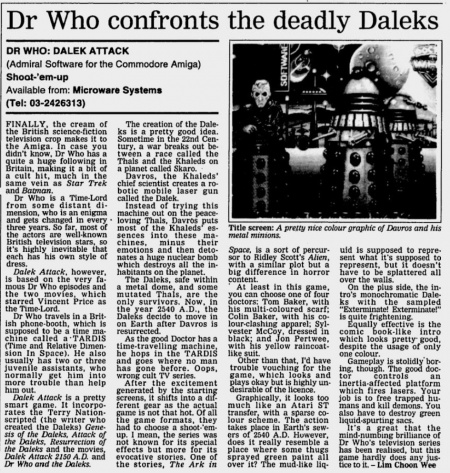 (Admiral Software for the Commodore Amiga)

FINALLY, the cream of the British science-fiction television crop makes it to the Amiga. In case you didn't know, Dr Who has a quite a huge following in Britain, making it a bit of a cult hit, much in the same vein as Star Trek and Batman.

Dr Who is a Time-Lord from some distant dimension, who is an enigma and gets changed in every three years. So far, most of the actors are well-known British television stars, so it's highly inevitable that each has his own style of dress.

Dalek Attack, however, is based on the very famous Dr Who episodes and the two movies, which starred Vincent Price as the Time-Lord.

Dr Who travels in a British phone-booth, which Is supposed to be a time machine called a TARDIS (Time and Relative Dimension In Space). He also usually has two or three juvenile assistants, who normally get him into more trouble than help him out.

The creation of the Daleks is a pretty good idea. Sometime in the 22nd Century, a war breaks out between a race called the Thals and the Khaleds on a planet called Skaro.

Instead of trying this machine out on the peace-loving Thals, Davros puts most of the Khaleds' essences into these machines, minus their emotions and then detonates a huge nuclear bomb which destroys all the inhabitants on the planet.

The Daleks, safe within a metal dome, and some mutated Thals, are the only survivors. Now, in the year 2540 A.D., the Daleks decide to move in on Earth after Davros is resurrected.

As the good Doctor has a time-travelling machine, he hops in the TARDIS and goes where no man has gone before. Oops, wrong cult TV series.

After the excitement generated by the starting screens, it shifts into a different gear as the actual game is not that hot. Of all the game formats, they had to choose a shoot-'em-up. I mean, the series was not known for its special effects but more for its evocative stories. One of the stories, The Ark in Space, is a sort of percursor to Ridley Scott's Alien, with a similar plot but a big difference in horror content.

At least in this game, you can choose one of four doctors: Tom Baker, with his multi-coloured scarf; Colin Baker, with his colour-clashing apparel; Sylvester McCoy, dressed in black; and Jon Pertwee, with his yellow raincoat-like suit.

Other than that, I'd have trouble vouching for the game, which looks and plays okay but is highly undesirable of the licence.

Graphically, it looks too much like an Atari ST transfer, with a sparse colour scheme. The action takes place in Earth's sewers of 2590 A.D. However, does it really resemble a place where some thugs sprayed green paint all over it? The mud-like liquid is supposed to represent what it's supposed to represent, but it doesn't have to be splattered all over the walls.

On the plus side, the intro's monochromatic Dale-ks with the sampled "Exterminate! Exterminate!" is quite frightening.

Equally effective is the comic book-like intro which looks pretty good, despite the usage of only one colour.

Gameplay is stolidly boring, though. The good doctor controls an inertia-affected platform which fires lasers. Your job is to free trapped humans and kill demons. You also have to destroy green liquid-spurting sacs.

It's a great that the mind-numbing brilliance of Dr Who's television series has been realised, but this game hardly does any justice to it.

Title screen: A pretty nice colour graphic of Davros and his metal minions.