Dr Who conquers time to land on planet Hollywood 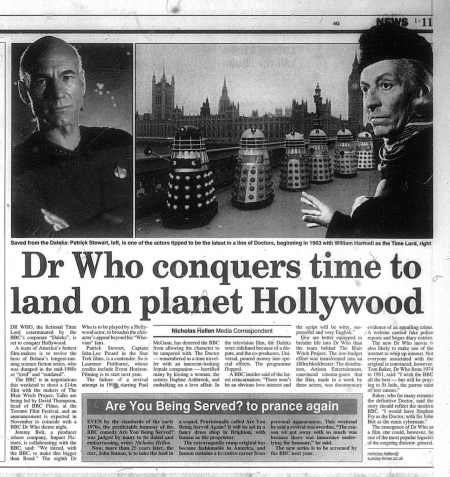 DR WHO, the fictional Time Lord exterminated by the BBC's corporate "Daleks", is set to conquer Hollywood.

A team of America's hottest film-makers is to revive the hero of Britain's longest-running science fiction series, who was dumped in the mid-1980s as "tired" and "outdated".

The BBC is in negotiations this weekend to shoot a £14m film with the makers of The Blair Witch Project. Talks are being led by David Thompson, head of BBC Films, at the Toronto Film Festival, and an announcement is expected in November to coincide with a BBC Dr Who theme night.

Jeremy Bolt, a producer whose company, Impact Pictures, is collaborating with the BBC, said: "We intend, with the BBC, to make this bigger than Bond." The eighth Dr Who is to be played by a Hollywood actor, to broaden the character's appeal beyond his "Whovian" fans.

Patrick Stewart, Captain Jean-Luc Picard in the Star Trek films, is a contender. So is Laurence Fishburne, whose credits include Event Horizon.

Filming is to start next year.

The failure of a revival attempt in 1996, starring Paul McGann, has deterred the BBC from allowing the character to be tampered with. The Doctor - remembered as a time traveller with an innocent-looking female companion - horrified many by kissing a woman, the actress Daphne Ashbrook, and embarking on a love affair. In the television film, the Daleks were sidelined because of a dispute, and the co-producers, Universal, poured money into special effects.

A BBC insider said of the latest reincarnation: "There won't be an obvious love interest and the script will be witty, suspenseful and very English."

Few are better equipped to breathe life into Dr Who than the team behind The Blair Witch Project. The low-budget effort was transformed into an £80m blockbuster. The distributors, Artisan Entertainment, convinced cinema-goers that the film, made in a week by three actors, was documentary evidence of an appalling crime. A website carried fake police reports and bogus diary entries.

The new Dr Who movie is also likely to make use of the internet to whip up interest. Not everyone associated with the original is convinced, however. Tom Baker, Dr Who from 1974 to 1981, said: "I wish the BBC all the best - but will be praying to St Jude, the patron saint of lost causes."

Baker, who for many remains the definitive Doctor, said the story should reflect the modern BBC. "I would have Stephen Fry as the Doctor, with Sir John Birt as the main cyberman."

The emergence of Dr Who as a film star could, however, be one of the most popular legacies of the outgoing director-general.