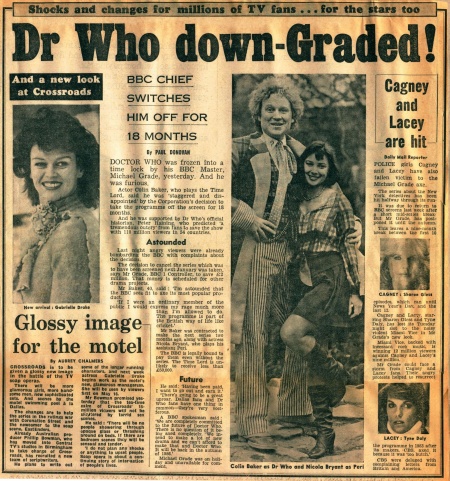 Shocks and changes for millions of TV fans ... for the stars too

BBC CHIEF SWITCHES HIM OFF FOR 18 MONTHS

DOCTOR WHO was frozen into a time lock by his BBC Master, Michael Grade, yesterday. And he was furious.

Actor Colin Baker, who plays the Time Lord, said he was 'staggered and disappointed' by the Corporation's decision to take the programme off the screen for 18 months.

And he was supported by Dr Who's official historian, Peter Haining, who predicted 'a tremendous outcry' from fans to save the show with 110 million viewers in 54 countries.

Last night angry viewers were already bombarding the BBC with complaints about the decision.

The decision to cancel the series which was to have been screened next January was taken, says Mr Grade, BBC 1 Controller, to save million. That money is scheduled for other drama projects.

Mr Baker, 40, said : 'I'm astounded that the BBC sees fit to axe its most popular product.

'If I were an ordinary member of the public I would express my rage much more than I'm allowed to do. The programme is part of the British way of life like cricket.'

Mr Baker was contracted to make the next series two months ago, along with actress Nicola Bryant, who plays his assistant Peri.

The BBC is legally bound to pay them even without the series. The Time Lord is unlikely to receive less than £50,000.

He said: 'Having been paid, I want to go out and earn it.'

'There's going to be a great uproar. Dallas fans and Dr Who fans have one thing in common—they're very vociferous.

A BBC spokesman said : 'We are completely committed to the future of Doctor Who. There is no question of it being axed completely. 'We intend to make a lot of new drama and we can't afford to make that and Doctor Who. It will be back in the autumn of 1986.'

Michael Grade was on holiday and unavailable for comment.

Caption: Colin Baker as Dr Who and Nicola Bryant as Peri