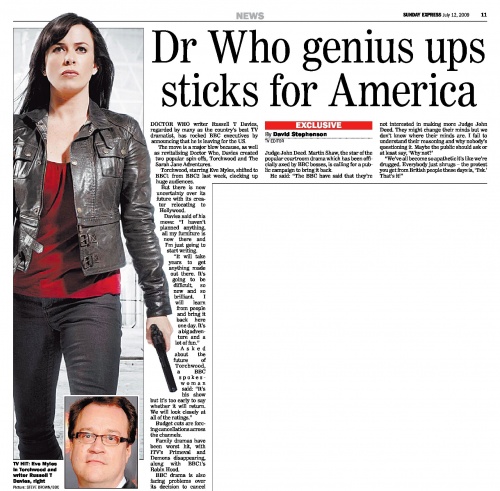 DOCTOR WHO writer Russell T Davies, regarded by many as the country's best TV dramatist, has rocked BBC executives by announcing that he is leaving for the US.

The move is a major blow because, as well as revitalising Doctor Who, Davies created two popular spin-offs, Torchwood and The Sarah Jane Adventures.

But there is now uncertainty over its future with its creator relocating to Hollywood.

Davies said of his move: "I haven't planned anything, all my furniture is now there and I'm just going to start writing.

"It will take years to get anything made out there. It's going to be difficult, so new and so brilliant. I will learn from people and bring it back here one day. It's a big adventure and a lot of fun."

Asked future of about the Torchwood, a BBC spokeswoman said: "It's his show but it's too early to say whether it will return. We will look closely at all of the ratings." Budget cuts are forcing cancellations across the channels.

Family dramas have been worst hit, with ITV's Primeval and Demons disappearing, along with BBC1's Robin Hood.

BBC drama is also facing problems over its decision to cancel Judge John Deed. Martin Shaw, the star of the popular courtroom drama which has been officially axed by BBC bosses, is calling for a public campaign to bring it back.

He said: "The BBC have said that they're not interested in making more Judge John Deed. They might change their minds but we don't know where their minds are. I fail to understand their reasoning and why nobody's questioning it. Maybe the public should ask or at least say, 'Why not?'

"We've all become so apathetic it's like we're drugged. Everybody just shrugs - the protest you get from British people these days is, ursk.' That's it!"