Dr Who gets Spielberg call to Hollywood 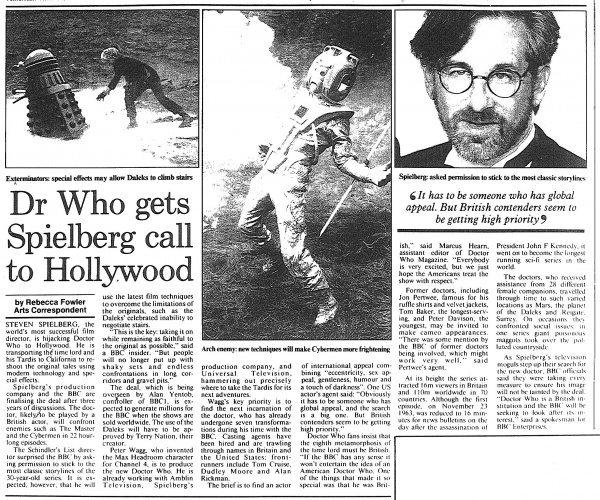 Steven Spielberg, the world's most successful film director, is hijacking Doctor Who to Hollywood. He is transporting the time lord and his Tardis to California to reshoot the original tales using modern technology and special effects.

Spielberg's production company and the BBC are finalising the deal after three years of discussions. The doctor, likely to be played by a British actor, will confront enemies such as The Master and the Cybermen in 22 hour-long episodes.

The Schindler's List director surprised the BBC by asking permission to stick to the most classic storylines of the 30-year-old series. It is expected, however, that he will use the latest film techniques to overcome the limitations of the originals, such as the Daleks' celebrated inability to negotiate stairs.

"This is the key: taking it on while remaining as faithful to the original as possible," said a BBC insider. "But people will no longer put up with shaky sets and endless confrontations in long corridors and gravel pits."

The deal, which is being overseen by Alan Yentob, controller of BBC1, is expected to generate millions for the BBC when the shows are sold worldwide. The use of the Daleks will have to be approved by Terry Nation, their creator.

Peter Wagg, who invented the Max Headroom character for Channel 4, is to produce the new Doctor Who. He is already working with Amblin Television, Spielberg's production company, and Universal Television, hammering out precisely where to take the Tardis for its next adventures.

Wagg's key priority is to find the next incarnation of the doctor, who has already undergone seven transformations during his time with the BBC. Casting agents have been hired and are trawling through names in Britain and the United States; frontrunners include Tom Cruise, Dudley Moore and Alan Rickman.

The brief is to find an actor of international appeal combining "eccentricity, sex appeal, gentleness, humour and a touch of darkness". One US actor's agent said: "Obviously it has to be someone who has global appeal, and the search is a big one. But British contenders seem to be getting high priority."

Doctor Who fans insist that the eighth metamorphosis of the time lord must be British. "If the BBC has any sense it won't entertain the idea of an American Doctor Who. One of the things that made it so special was that he was British," said Marcus Hearn, assistant editor of Doctor Who Magazine. "Everybody is very excited, but we just hope the Americans treat the show with respect."

Former doctors, including Jon Pertwee, famous for his ruffle shirts and velvet jackets, Tom Baker, the longest-serving, and Peter Davison, the youngest, may be invited to make cameo appearances. "There was some mention by the BBC of former doctors being involved, which might work very well," said Pertwee's agent.

At its height the series attracted 16m viewers in Britain and 110m worldwide in 70 countries. Although the first episode, on November 23 1963, was reduced to 16 minutes for news bulletins on the day after the assassination of President John F Kennedy, it went on to become the longest running sci-fi series in the world.

The doctors, who received assistance from 28 different female companions, travelled through time to such varied locations as Mars, the planet of the Daleks and Reigate, Surrey. On occasions they confronted social issues: in one series giant poisonous maggots took over the polluted countryside.

As Spielberg's television moguls step up their search for the new doctor, BBC officials said they were taking every measure to ensure his image will not be tainted by the deal. "Doctor Who is a British institution and the BBC will be seeking to look after its interest," said a spokesman for BBC Enterprises.