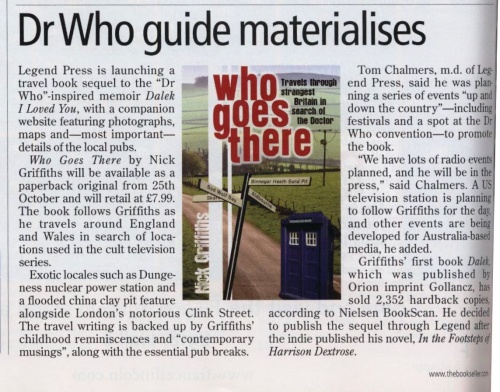 Legend Press is launching a travel book sequel to the "Dr Who"-inspired memoir Dalek I Loved You, with a companion website featuring photographs, maps and--most important--details of the local pubs.

Who Goes There by Nick Griffiths will be available as a paperback original from 25th October and will retail at £7.99. The book follows Griffiths as he travels around England and Wales in search of locations used in the cult television series.

alongside London's notorious Clink Street. The travel writing is backed up by Griffiths' childhood reminiscences and "contemporary musings", along with the essential pub breaks.

Tom Chalmers, m.d. of Legend Press, said he was planning a series of events "up and down the country"--including festivals and a spot at the Dr Who convention--to promote the book.

"We have lots of radio events planned, and he will be in the press," said Chalmers. A US television station is planning to follow Griffiths for the day, and other events are being developed for Australia-based media, he added.

Griffiths' first book Dalek, which was published by Orion imprint Gollancz, has sold 2,352 hardback copies, according to Nielsen BookScan. He decided to publish the sequel through Legend after the indie published his novel, In the Footsteps of Harrison Dextrose.