Dr Who in Movie Bid 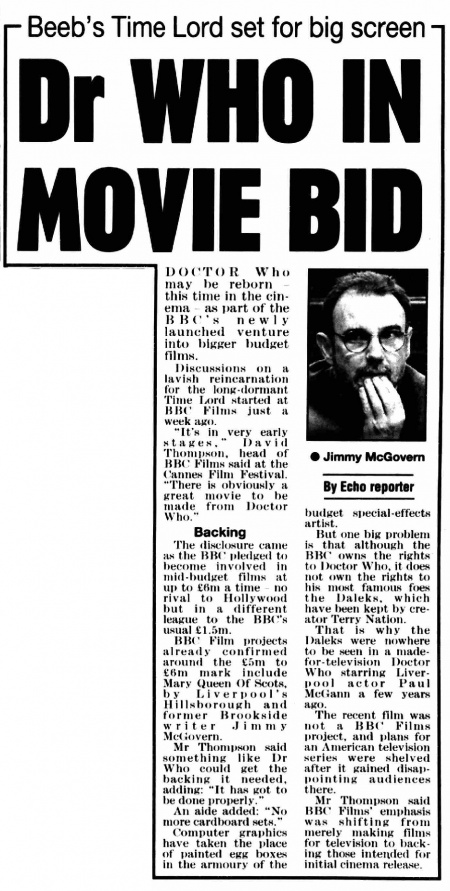 DOCTOR Who may be reborn this time in the cinema - as part of the BBC's newly launched venture into bigger budget films.

Discussions on a lavish reincarnation for the long-dormant Time Lord started at BBC Films Just a week ago.

"It's in very early stages," David Thompson, head of BBC Films said at the Cannes Film Festival. "There is obviously a great movie to he made from Doctor Who."

The disclosure came as the BBC pledged to become involved In mid-budget films at up to tam a time-no rival to Hollywood but in a different league to the BBC's usual £1.5m.

Mr Thompson said something like Dr Who could get the backing it needed, adding: "It has got to be done properly." An aide added: "No more cardboard sets." Computer graphics have taken the place of painted egg boxes in the armoury of the budget special-effects artist.

Hut one big problem is that although the BBC owns the rights to Doctor Who, it does not own the rights to his most famous foes the Daleks, which have been kept by creator Terry Nation. That is why the Daleks were nowhere to be seen in a made-for-television Doctor Who starring Liverpool actor Paul McGann a few years ago.

The recent film was not a BBC Films project, and plans for an American television series were shelved after it gained disappointing audiences there.