Dr Who is back in our dimension, and once again he's acting inappropriately, and being chased by Daleks 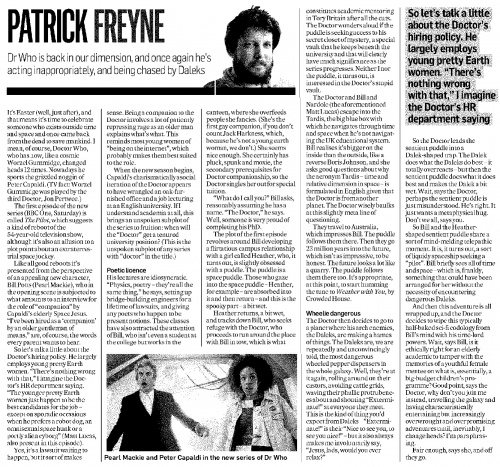 Ids Easter (well, just after), and that means it's time to celebrate someone who exists outside time and space and once came back from the dead to save mankind. I mean, of course, Doctor Who, who has now, like a cosmic Worzel Gummidge, changed heads 12 times. Nowadays he sports the grizzled noggin of Peter Capaldi. (TV fact: Worzel Gummidge was played by the third Doctor, Jon Pertwee.)

The first episode of the new series (BBC One, Saturday) is called The Pilot, which suggests a kind of reboot of the 54-year-old television show, although it's also an allusion to a plot point about an extraterrestrial space jockey.

Like all good reboots it's presented from the perspective of an appealing new character, Bill Potts (Pearl Mackie), who in the opening scene is subjected to what amounts to an interview for the role of "companion" by Capaldi's elderly Space Jesus. "I've been hired as a 'companion' by an older gentleman of means," are, of course, the words every parent wants to hear.

So let's talk a little about the Doctor's hiring policy. He largely employs young pretty Earth women. "There's nothing wrong with that," I imagine the Doctor's HR department saying. "The younger pretty Earth women just happen to be the best candidates for the job - except on sporadic occasions when he prefers a robot dog, an omnisexual space hunk or a portly alien cyborg" (Matt Lucas, also present in this episode).

Yes, it's a lawsuit waiting to happen, but it sort of makes sense. Being a companion to the Doctor involves a lot of patiently repressing rage as an older man explains what's what. This reminds most young women of "being on the internee, which probably makes them best suited to the role.

When the new season begins, Capaldi's charismatically asocial iteration of the Doctor appears to have wrangled an oak-furnished office and a job lecturing at an English university. If I understand academia at all, this brings an unspoken subplot of the series to fruition: when will the "Doctor" get a tenured university position? (This is the unspoken subplot of any series with "doctor" in the title.)

His lectures are idiosyncratic. "Physics, poetry -they're all the same thing," he says, setting up bridge-building engineers for a lifetime of lawsuits, and giving any poets who happen to be present notions. These classes have also attracted the attention of Bill, who isn't even a student at the college but works in the canteen, where she overfeeds people she fancies. (She's the first gay companion, if you don't count Jack Harkness, which, because he's not a young earth woman, we don't.) She seems nice enough. She certainly has pluck, spunk and moxie, the secondary prerequisites for Doctor companionship, so the Doctor singles her out for special tuition.

"What do I call you?" Bill asks, reasonably assuming he has a name. "The Doctor," he says. Well, someone is very proud of completing his PhD.

The plot of the first episode revolves around Bill developing a flirtatious campus relationship with a girl called Heather, who, it turns out, is slightly obsessed with a puddle. The puddle is a space puddle. Those who gaze into the space puddle - Heather, for example - are absorbed into it and then return - and this is the spooky part - a bit wet.

Heather returns, a bit wet, and tracks down Bill, who seeks refuge with the Doctor, who proceeds to run around the place with Bill in tow, which is what constitutes academic mentoring in Tory Britain after all the cuts. The Doctor wonders aloud if the puddle is seeking access to his secret closet of mystery, a special vault that he keeps beneath the university and that will clearly have much significance as the series progresses. Neither I nor the puddle, it turns out, is interested in the Doctor's stupid vault.

The Doctor and Bill and Nardole (the aforementioned Matt Lucas) escape into the Tardis, the big blue box with which he navigates through time and space when he's not navigating the UK educational system. Bill realises it's bigger on the inside than the outside, like a reverse Boris Johnson, and she asks good questions about why the acronym Tardis - time and relative dimension in space - is formulated in English given that the Doctor is from another planet. The Doctor wisely baulks at this slightly meta line of questioning.

The Doctor then decides to go to a planet where his arch enemies, the Daleks, are making a hames of things. The Daleks are, we are repeatedly and unconvincingly told, the most dangerous wheeled pepper dispensers in the whole galaxy. Well, they're at it again, rolling around on their castors, avoiding cattle grids, waving their phallic protrubences about and shouting "Exterminate!" at everyone they meet. This is the kind of thing you'd expect from Daleks - "Exterminate!" is their "Nice to see you, to see you nice!" -but it also always makes me involuntarily say, "Jesus, lads, would you ever relax?"

So Bill and the Heather-shaped sentient puddle share a sort of mind-melding telepathic moment. It is, it turns out, a sort of liquidy spaceship seeking a "pilot". Bill briefly sees all of time and space - which is, frankly, something that could have been arranged for her without the necessity of encountering dangerous Daleks.

And then this adventure is all wrapped up, and the Doctor decides to wipe this typically half-baked sci-fi codology from Bill's mind with his time-lord powers. Wait, says Bill, is it ethically right for an elderly academic to tamper with the memories of a youthful female mentee on what is, essentially, a big-budget children's programme? Good point, says the Doctor, why don't you join me instead, travelling the galaxy and having characteristically entertaining but increasingly overwrought and overpromising adventures until, inevitably, I change heads? I'm paraphrasing.

Fair enough, says she, and off they go.

Caption: Pearl Mackie and Peter Capaldi in the new series of Dr Who