Dr Who lands in the middle of a £22m lawsuit 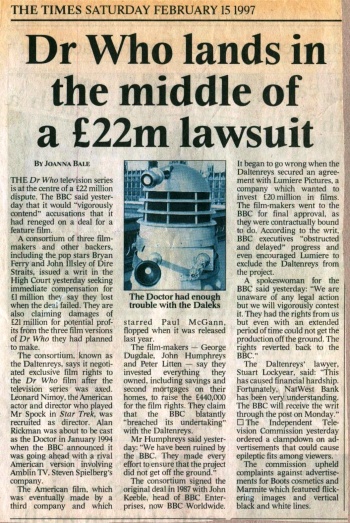 The Dr Who television series is at the centre of a £22 million dispute. The BBC said yesterday/that it would "vigorously contend" accusations that it had reneged on a deal for a feature film.

A consortium of three filmmakers and other hackers, including the pop stars Bryan Ferry and John Illsley of Dire Straits, issued a writ in the High Court yesterday seeking immediate compensation for £1 million they say they lost when the deal failed. They are also claiming damages of £21 million for potential profits from the three film versions of Dr Who they had planned to make.

The consortium, known as the Daltenreys, says it negotiated exclusive film rights to the Dr Who film after the television series was axed. Leonard Nimoy, the American actor and director who played Mr Spock in Star Trek, was recruited as director. Alan Rickman was about to be cast as the Doctor in January 1994 when the BBC announced it was going ahead with a rival American version involving Amblin TV, Steven Spielberg's company.

The American film, which was eventually made by a third company and which starred Paul McGann, flopped when it was released last year.

The film-makers George Dugdale, John Humphreys and Peter Litten -- say they invested everything they owned, including savings and second mortgages on their homes, to raise the £440,000 for the film rights. They claim that the BBC blatantly "breached its undertaking" with the Daltenreys.

Mr Humphreys said yesterday: "We have been ruined-by the BBC. They made every effort to ensure that the project did not get off the ground."

The consortium signed the original deal in 1987 with John Keeble, head of BBC Enterprises, now BBC Worldwide. It began to go wrong when the Daltenreys secured an agreement with Lumiere Pictures, a company which wanted to invest £20 million in films. The film-makers went to the BBC for final approval, as they were contractually bound to do. According to the writ, BBC executives "obstructed and delayed" progress and even encouraged Lumiere to exclude the Daltenreys from the project.

A spokeswoman for the BBC said yesterday: "We are unaware of any legal action but we will vigorously contest it. They had the rights from us but even with an extended period of time could not get the production off the ground. The rights reverted back to the BBC."

The Daltenreys' lawyer, Stuart Lockyear, said: "This has caused financial hardship. Fortunately, NatWest Bank has been very understanding. The BBC will receive the writ through the post on Monday."

Caption: The Doctor had enough trouble with the Daleks