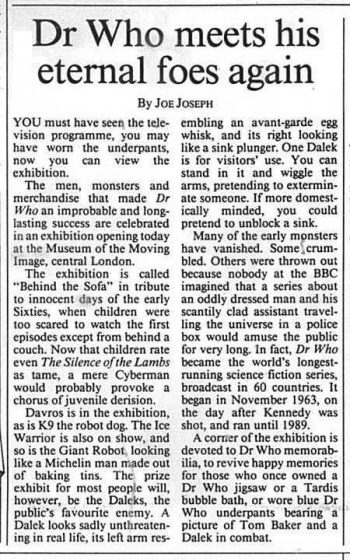 YOU must have seen the television programme, you may have worn the underpants, now you can view the exhibition.

The men, monsters and merchandise that made Dr Who an improbable and long-lasting success are celebrated in an exhibition opening today at the Museum of the Moving Image, central London.

The exhibition is called "Behind the Sofa" in tribute to innocent days of the early Sixties, when children were too scared to watch the first episodes except from behind a couch. Now that children rate even The Silence of the Lambs as tame, a mere Cyberman would probably provoke a chorus of juvenile derision.

Davros is in the exhibition, as is K9 the robot dog. The Ice Warrior is also on show, and so is the Giant Robot, looking like a Michelin man made out of baking tins. The prize exhibit for most people will, however, be the Daleks, the public's favourite enemy. A Dalek looks sadly unthreatening in real life, its left arm resembling an avant-garde egg whisk, and its right looking like a sink plunger. One Dalek is for visitors' use. You can stand in it and wiggle the arms, pretending to exterminate someone. If more domestically minded, you could pretend to unblock a sink.

Many of the early monsters have vanished. Some crumbled. Others were thrown out because nobody at the BBC imagined that a series about an oddly dressed man and his scantily clad assistant travelling the universe in a police box would amuse the public for very long. In fact, Dr Who became the world's longest-running science fiction series, broadcast in 60 countries. It began in November 1963, on the day after Kennedy was shot, and ran until 1989.

A corner of the exhibition is devoted to Dr Who memorabilia, to revive happy memories for those who once owned a Dr Who jigsaw or a Tardis bubble bath, or wore blue Dr Who underpants bearing a picture of Tom Baker and a Dalek in combat.