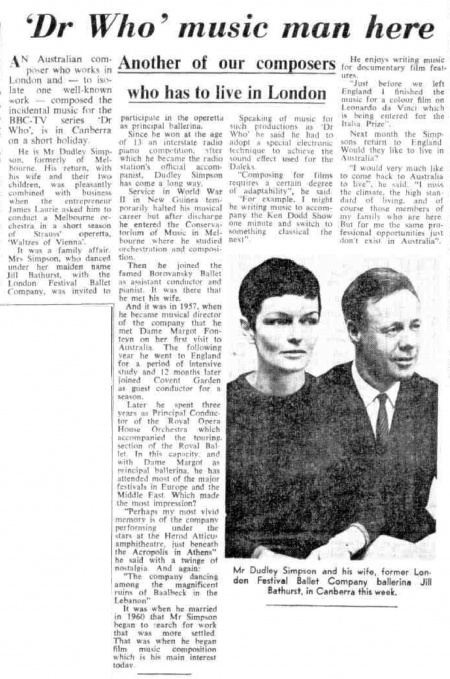 Another of our composers who has to live in London

AN Australian composer who works in London and — to isolate one well-known work — composed the incidental music for the BBC-TV series 'Dr Who', is in Canberra on a short holiday.

He is Mr Dudley Simpson, formerly of Melbourne. His return, with his wife and their two children, was pleasantly combined with business when the entrepreneur James Laurie asked him to conduct a Melbourne orchestra in a short season of Strauss' operetta, 'Waltzes of Vienna'.

It was a family affair. Mrs Simpson, who danced under her maiden name Jill Bathurst, with the London Festival _ Ballet Company, was invited to participate in the operetta as principal ballerina.

Since he won at the age of 13 an interstate radio piano competition, after which he became the radio station's official accompanist, Dudley Simpson has come a long way.

Service in World War II in New Guinea temporarily halted his musical career but after discharge he entered the Conservatorium of Music in Melbourne where he studied orchestration and composition.

Then he joined the famed Borovansky Ballet as assistant conductor and pianist. It was there that he met his wife.

And it was in 1957, when he became musical director of the company that he met Dame Margot Fonteyn on her first visit to Australia. The following year he went to England for a period of intensive study and 12 months later Joined Covent Garden as guest conductor for a season.

Later he spent three years as Principal Conductor of the Royal Opera House Orchestra which accompanied the touring, section of the Royal Ballet. In this capacity, and with Dame Margot as principal ballerina, he has attended most of the major festivals in Europe and the Middle East. Which made the most impression?

"Perhaps my most vivid memory is of the company performing under the stars at the Herod Atticus amphitheatre, just beneath the Acropolis in Athens" he said with a twinge of nostalgia. And again:

It was when he married in 1960 that Mr Simpson began to search for work that was more settled. That was when he began film music composition which is his main interest today.

Speaking of music for such productions as 'Dr Who' he said he had to adopt a special electronic technique to achieve the sound effect used for the Daleks.

"Composing for films requires a certain degree of adaptability", he said.

"For example, I might be writing music to accompany the Ken Dodd Show one minute and switch to something classical the next".

"Just before we left England I finished the music for a colour film on Leonardo da Vinci which is being entered for the Italia Prize".

Next month the Simpsons return to England Would they like to live in Australia?

"I would very much like to come back to Australia to live", he said. "I miss the climate, the high standard of living, and of course those members of my family who are here. But for me the same professional opportunities just don't exist in Australia".

The currency in this case is sterling.