Dr Who on a flying visit 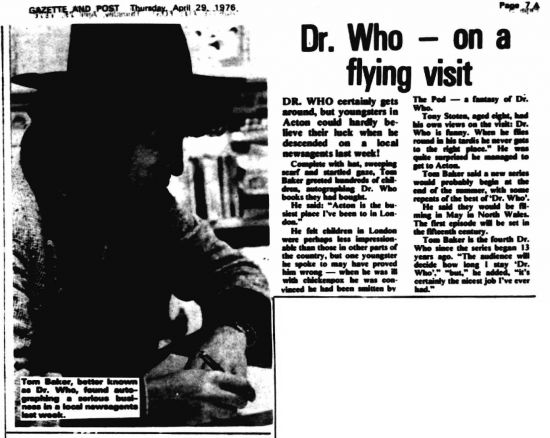 DR. WHO certainly gets around, but youngsters in Acton could hardly believe their luck when he descended on a local newsagents last week!

He said: "Acton is the busiest place I've been to London."

He felt children is London were perhaps less impressionable this those in other parts of the country, but one youngster he spoke to may have proved him wrong - when he was ill with chickenpox he was convinced he had smitten by The Pod - a fantasy of Dr. Who.

Tony Stotem, aged eight, had his own views on the visit: Dr. Who is fantasy. When he flies round in his tardis he never gets to the right place." He was quite surprised he managed to get to Acton.

Tom Baker said a new series would probably begin at the end of the summer, with some repeats of the best of 'Dr. Who'.

He said they would be filming is May is North Wales. The first episode will be set in the fifteenth century.

Tom Baker is the fourth Dr. Who since the series began 13 years ago. "The audience will decide how long I stay 'Dr. Who'," "but." he added, "it's certainly the nicest job I've ever had."