Dr Who pops into the Vic 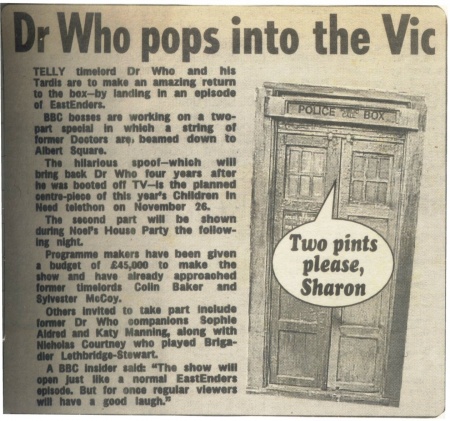 TELLY timelord Dr Who and his Tardis are to make an amazing return to the box—by landing in an episode of EastEnders.

BBC bosses are working on a two-part special in which a string of former Doctors are beamed down to Albert Square.

The hilarious spoof—which will bring back Dr Who four years after he was booted off TV—is the planned centre-piece of this year's Children in Need telethon on November 26.

The second part will be shown during Noel's House Party the following night.

Programme makers have been given a budget of £45,000 to make the show and have already approached former timelords Colin Baker and Sylvester McCoy.

Others invited to take part include former Dr Who companions Sophie Aldred and Katy Manning, along with Nicholas Courtney who played Brigadier Lethbridge-Stewart.

A BBC insider said: "The show will open just like a normal EastEnders episode. But for once regular viewers will have a good laugh."