Dr Who save my life says Billie Piper 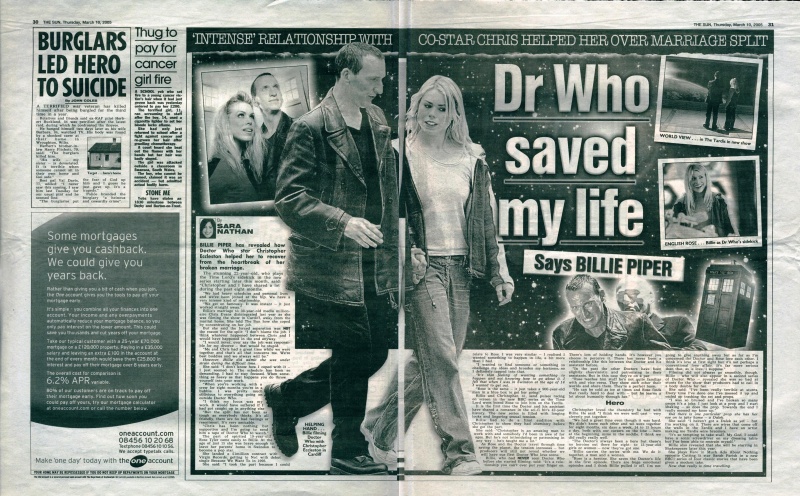 BILLIE PIPER has revealed how Doctor Who star Christopher Eccleston helped her to recover from the heartbreak of her broken marriage.

The stunning 22-year-old, who plays the Time Lord's sidekick in the new series starting later this month, said: "Christopher and I have shared a lot during the past eight months.

"We had heavy schedules and personal lives and we've been joined at the hip. We have a very intense kind of relationship.

"We get on famously. It was instant -- it just worked straight away."

Billie's marriage to 38-year-old media millionaire Chris Evans disintegrated last year as she was filming the show in Cardiff, away from the marital home. She told The Sun how she coped by concentrating on her job.

But she said the forced separation was NOT the reason for the split: "I don't blame the job. I think whatever happened between Chris and I would have happened in the end anyway.

"I would never, ever say the job was responsible for my divorce — that would be stupid.

"Me and Chris had a great time while we were together and that's all that concerns me. We're best buddies and we always will be."

However, Billie did admit she was under strain during the difficult time.

She said: "I don't know how I coped with it —I just seemed to. The schedule has been so demanding, I had to stay focused. When something as heavy as that happens you do throw yourself into your work.

"When you're working with a crew for eight months you're in a bubble. I was pretty much oblivious to everything going on outside Doctor Who.

"I think my focus was my work. It would have suffered if I had got caught up in anything else

"But the split has not been as tough as everybody thinks. It's all friendly, there are no bad feelings or resentment. It's very amicable.

"Chris has been nothing but supportive and I'm going to send him a tape of Doctor Who to watch."

The part of spirited 19-year-old Rose Tyler came easily to Billie. At the age of just 15 she was brave enough to leave her parents' home in Swindon to become a pop star.

She landed a £1 million contract with Virgin Records, getting to No1 with debut single Because We Want To in 1998.

She said: "I took the part because I could relate to Rose. I was very similar — I realised I wanted something to happen in life, a bit more than I had.

"I wanted to find someone or something to challenge my ideas and broaden my horizons, so I definitely tapped into that.

"It's that feeling of wanting something to happen and not knowing how to go about it. I felt that when I was in Swindon at the age of 14 I wanted to get out.

Billie and Christopher, 41, send pulses racing on screen in the new BBC series as the Time Lord woos bored Rose to join him on the Tardis.

It is the first time the Doctor and his assistant have shared a romance in the sci-fi hit's 42-year history. The new series is filled with longing looks and lingering sexual tension.

Billie had to do a final audition with Christopher to show they had chemistry before she got the part.

She said: "Christopher is an amazing man to work with and somebody I'd been in awe of for ages. But he's not intimidating or patronising in any way — he's taught me a lot."

As Rose and the Doctor travel through time saving the planet, the tension increases but producers will still not reveal whether we will have our first Doctor Who love scene.

Billie, who had NEVER seen Doctor Who before she started filming, said: "It's a relationship you can't ever put your finger on.

There's lots of holding hands. It's however you choose to perceive it. There has never been a relationship like this between the Doctor and his assistant before.

"In the past the other Doctors have been slightly chauvinistic and patronising to their assistants. But in this case they're on a par.

"Rose teaches him stuff he's not quite familiar with and vice versa. They show each other their worlds and share them. They're a perfect team.

"He can be cold as ice at times and Rose finds that really hard to deal with — but he learns a lot about humanity through her."

Christopher loved the chemistry he had with Billie. He said: "I think we were well cast -- very cleverly put together.

"We had a great time even though it was hard. We didn't know each other and we were together for eight months, six days a week, 14 to 15 hours a day, both with our careers on the line — hers at the beginning, mine in the middle. I think we did really really well.

"The Doctor's always been a hero but there's no heroine out there for eight- to 12-year-old girls or women — now they've got one.

"Billie carries the series with me. We do it together, a man and a woman.

"Rose is a heroine. She saves the Doctor's life in the first episode. There are huge emotional episodes and I think Billie pulled it off. I'm not going to give anything away but as far as I'm concerned the Doctor and Rose love each other. I think it's love at first sight but it's not perhaps a conventional love affair. It's far more serious than that, as is love, I suppose."

Filming did not always go smoothly, though. Billie -- who will also appear in a second series of Doctor Who — revealed she was so bad at stunts for the show that producers had to call in a body double for her.

She said: "I've been really terrible at stunts. Every time I've done one I've messed it up and ended up trashing the set and props.

"I was so bruised and I've broken so many props it's a joke. I just look at a prop and I start shaking — as does the prop. Towards the end I really messed my knee up."

But there is one particular prop she has her eye on to take home — a Dalek.

She said: "I haven't got a Dalek as yet — but I'm working on it. There are wires that come off the walls in the Tardis and I have an artist making me Tardis wire bracelets.

"It's so tempting to take stuff. My God, I could have a sonic screwdriver on my dressing table but I've been able to restrain myself."

Billie also revealed that she will be starring in Shakespeare later this year.

She plays Hero in Much Ado About Nothing opposite Cutting It star Sarah Parish in a new BBC1 series of four classic stories that have been given a modern take.

Now that really is time travelling.

WORLD VIEW ... in The Tardis in new show