Dr Who schoolboy lands in dock 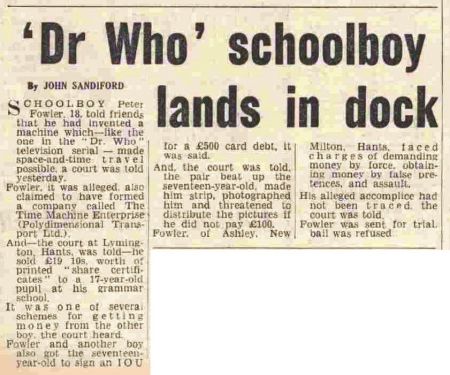 SCHOOLBOY Peter Fowler, 18, told friends that he had invented a machine which—like the one in the "Dr. Who" television serial — made space-and-time travel possible, a court was told yesterday.

Fowler, it was alleged. also claimed to have formed a company called The Time Machine Enterprise (Polydimensional Transport Ltd.).

And—the court at Lymington, Hants, was told—he sold £19 10s. worth of printed "share certificates" to a 17-year-old pupil at his grammar school.

It was one of several schemes for getting money from the other but, the court heard.

Fowler and another boy also got the seventen-year-old to sign an IOU for a £500 card debt, it was said.

And, the court was told, the pair beat up the seventeen-year-old, made him strip, photographed him and threatened to distribute the pictures if he did not pay £100.

His alleged accomplice had not been traced, the court was told.

Fowler was sent for trial, bail was refused