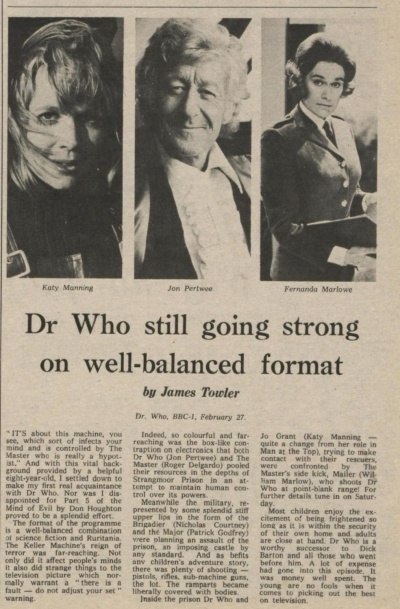 "IT'S about this machine, you see, which sort of infects your mind and is controlled by The Master who is really a hypnotist." And with this vital background provided by a helpful eight-year-old. I settled down to make my first real acquaintance with Dr Who. Nor was I disappointed for Part 5 of the Mind of Evil by Don Houghton proved to be a splendid effort.

The formal of the programme is a well-balanced combination of science fiction and Runtania. The Keller Machine's reign of terror was far-reaching. Not only did it affect people's minds it also did strange things to the television picture which normally warrant a "there is fault — do not adjust your set" warning.

Indeed, so colourful and far reaching was the box-like contraption on electronics that both Dr Who (Jon Pertwee) and The Master (Roger Delgado) pooled their resources in the depths of Stangmoor Prison in an attempt to maintain human control over its powers.

Meanwhile the military, represented by some splendid stiff upper lips in the form of the Brigadier (Nicholas Courtney) and the Major (Patrick Godfrey) were planning an assault of the prison, an imposing castle by any standard. And as befits any children's adventure story, there was plenty of shooting--pistols, rifles, sub-machine guns, the lot. The ramparts became liberally covered with bodies.

Inside the prison Dr Who and Jo Grant (Katy Manning — quite a change from her role in Man at the Top), trying to make contact with their rescuers were confronted by The Master's side kick, Mailer (William Marlow), who shoots Dr Who at point-blank range! For further details tune in on Saturday.

Most children enjoy the excitement of being frightened so long as it is within the security their own home and the adults are close at hand. Dr Who is a worthy successor to Dick Barton and all those who went before him. A lot of expense had gone into this episode. It was money well spent. The young are no fools when it comes to picking out the best on television.