Dr Who takes a bow at Proms 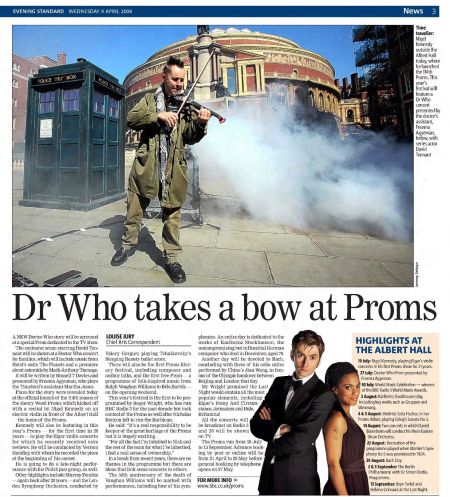 A NEW Doctor Who story will be screened at a special Prom dedicated to the TV show The exclusive scene starring David Tennant will be shown at a Doctor Who concert for families, which will include music from Hoist's suite The Planets and a premiere about asteroids by Mark-Anthony Turnage. It will be written by Russell T Davies and presented by Freema Agyeman, who plays the Timelord's assistant Martha Jones. Plans for the story were revealed today at the official launch of the 114th season of the Henry Wood Proms which kicked off with a recital by Nigel Kennedy on an electric violin in front of the Albert Hall - the home of the Proms.

Kennedy will also be featuring in this year's Proms — for the first time in 20 years — to play the Elgar violin concerto for which he recently received rave reviews. He will be conducted by Vernon Handley, with whom he recorded the piece at the beginning of his career.

He is going to do a late-night performance with his Polish jazz group, as well. Other highlights include Murray Perahia again back after 20 years — and the London Symphony Orchestra, conducted by Valery Gergiev, playing Tchaikovsky's Sleeping Beauty ballet score.

There will also be the first Proms literary festival, including composer and author talks, and the first free Prom — a programme of folk-inspired music from Ralph Vaughan Williams to Béla Bartók on the opening weekend.

This year's festival is the first to be programmed by Roger Wright, who has run BBC Radio 3 for the past decade but took control of the Proms as well after Nicholas Kenyon left to run the Barbican.

He said: "It's a real responsibility to be keeper of the great heritage of the Proms but it is hugely exciting.

"For all the fact I'm indebted to Nick and the rest of the team for what I've inherited, I feel a real sense of ownership."

In a break from recent years, there are no themes in the programme but there are ideas that link some concerts to others. The 50th anniversary of the death of Vaughan Williams will be marked with performances, including four of his sym phonies. An entire day is dedicated to the works of Karlheinz Stockhausen, the uncompromising but influential German composer who died in December, aged 79.

Another day will be devoted to Bach, concluding with three of his cello suites performed by China's Jian Wang, in honour of the Olympic handover between Beijing and London that day.

Mr Wright promised the Last Night would contain all the most popular elements, including Elgar's Pomp And Circumstance, Jerusalem and Rule, Britannia!

All the concerts will be broadcast on Radio 3 and 26 will be shown on TV.

The Proms run from 18 July to 13 September. Advance booking by post or online will be from 21 April to 20 May before general booking by telephone opens on 27 May.

HIGHLIGHTS AT THE ALBERT HALL

2 August: Karlheinz Stockhausen day, including key works such as Gruppen and Stimmung.

14 August: Two concerts in which Daniel Barenboim will conduct his West-Eastern Divan Orchestra.

22 August: Recreation of the programme played when Mahler's Symphony No 5 was premiered in 1904.

13 September: Bryn Terfel and Helene Grimaud at the Last Night.

Caption: Time traveller: Nigel Kennedy outside the Albert Hall today, where he launched the 114th Proms. This year's festival will feature a Dr Who concert presented by the doctor's assistant, Freema Agyeman, below, with series actor David Tennant Jeremy Selwyn