Dr Who tale of spaceships and Smokies 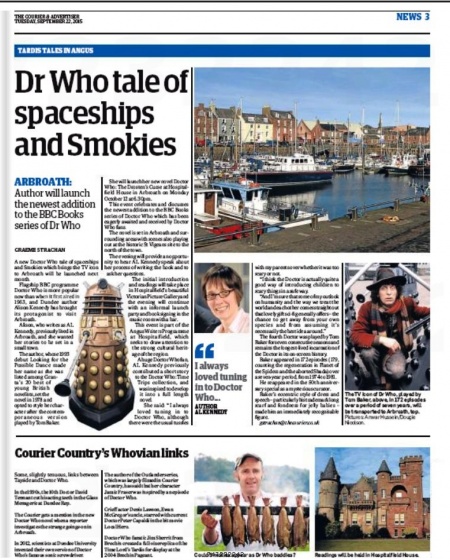 A new Doctor Who tale of spaceships and Smokies which brings the TV icon to Arbroath will be launched next month.

Flagship BBC programme Doctor Who is more popular now than when it first aired in 1963, and Dundee author Alison Kennedy has brought its protagonist to visit Arbroath.

Alison, who writes as AL Kennedy, previously lived in Arbroath, and she wanted her stories to be set in a small town.

The author, whose 1993 debut Looking for the Possible Dance made her name as she was listed among Granta's 20 best of young British novelists, set the novel in 1978 and opted to style her character after the contemporaneous version played by Tom Baker.

She will launch her new novel Doctor Who: The Drosten's Curse at Hospitalfield House in Arbroath on Monday October 12 at 6.30pm.

This event celebrates and discusses the newest addition to the BBC Books series of Doctor Who which has been eagerly awaited and received by Doctor Who fans.

The novel is set in Arbroath and surrounding areas with scenes also playing out at the historic St Vigeans site to the north of the town.

The evening will provide an opportunity to hear AL Kennedy speak about her process of writing the book and to ask her questions.

The initial introduction and readings will take place in Hospitalfield's beautiful Victorian Picture Gallery and the evening will continue with an informal launch party and book signing in the music room with a bar.

This event is part of the Angus Writers Programme at Hospitalfield, which seeks to draw attention to the strong cultural heritage of the region.

A huge Doctor Who fan, AL Kennedy previously contributed a short story to the Doctor Who: Time Trips collection, and was inspired to develop it into a full length novel.

She said: "I always loved tuning in to Doctor Who, although there were the usual tussles with my parents over whether it was too scary or not.

"I think the Doctor is actually quite a good way of introducing children to scary things in a safe way.

"And I'm sure that some of my outlook on humanity and the way we treat the world and each other comes straight out that lovely gift sci-fi generally offers – the chance to get away from your own species and from assuming it's necessarily the best idea around."

The fourth Doctor was played by Tom Baker for seven consecutive seasons and remains the longest-lived incarnation of the Doctor in its on-screen history.

Baker appeared in 172 episodes (179, counting the regeneration in Planet of the Spiders and the aborted Shada) over a seven-year period, from 1974 to 1981.

He reappeared in the 50th anniversary special as a mysterious curator.

Baker's eccentric style of dress and speech – particularly his trademark long scarf and fondness for jelly babies – made him an immediately recognisable figure.

Some, slightly tenuous, links between Tayside and Doctor Who. In the 1990s, the 10th Doctor David Tennant cut his acting teeth in the Glass Menagerie at Dundee Rep. The Courier gets a mention in the new Doctor Who novel when a reporter investigates the strange goings-on in Arbroath. In 2012, scientists at Dundee University invented their own version of Doctor Who's famous sonic screwdriver. The author of the Outlander series, which was largely filmed in Courier Country, has said that her character Jamie Fraser was inspired by an episode of Doctor Who. Crieff actor Denis Lawson, Ewan McGregor's uncle, starred with current Doctor Peter Capaldi in the hit movie Local Hero. Doctor Who fanatic Jim Sherrit from Brechin created a full-size replica of the Time Lord's Tardis for display at the 2004 Brechin Pageant.