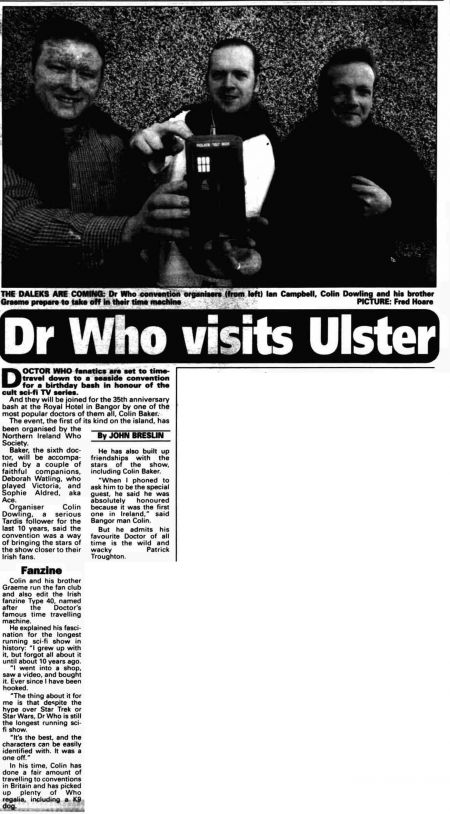 DOCTOR WHO fanatics are set to time-travel down to a seaside convention for a birthday bash in honour of the cult sci-fi TV series.

And they will be joined for the 35th anniversary bash at the Royal Hotel in Bangor by one of the most popular doctors of them all, Colin Baker.

The event, the first of its kind on the island, has been organised by the Northern Ireland Who Society.

Baker, the sixth doctor, will be accompanied by a couple of faithful companions, Deborah Watling, who played Victoria, and Sophie Aldred, aka Ace.

Organiser Colin Dowling, a serious Tardis follower for the last 10 years, said the convention was a way of bringing the stars of the show closer to their Irish fans.

He explained his fascination for the longest running sci-fi show in history: "I grew up with it, but forgot all about it until about 10 years ago.

"I went into a shop, saw a video, and bought it. Ever since I have been hooked.

"The thing about it for me is that despite the hype over Star Trek or Star Wars, Dr Who is still the longest running sci-fi show.

'It's the best, and the characters can be easily identified with. It was a one off."

In his time, Colin has done a fair amount of travelling to conventions in Britain and has picked up plenty of Who regalia, including a K9 dog.

He has also built up friendships with the stars of the show. including Colin Baker.

"When I phoned to ask him to be the special guest, he said he was absolutely honoured because it was the first one in Ireland." said Bangor man Colin.

But he admits his favourite Doctor of all time is the wild and wacky Patrick Troughton.

Caption: THE DALEKS ARE COMING: Dr Who convention organisers (from left) Ian Campbell, Colin Dowling and his brother Graeme prepare to take off in their time machine