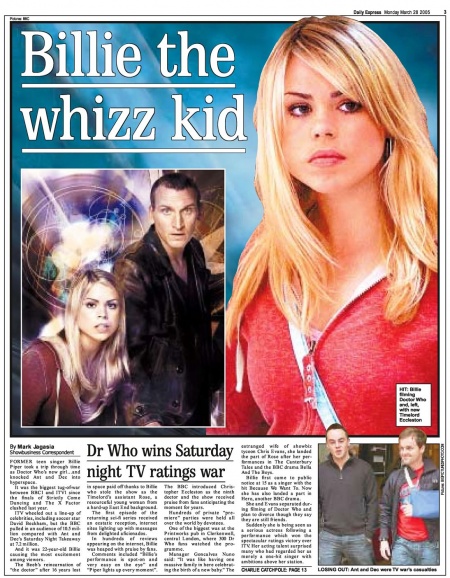 It was the biggest tug-of-war between BBC1 and ITV1 since the finals of Strictly Come Dancing and The X Factor clashed last year.

ITV wheeled out a line-up of celebrities, including soccer star David Beckham, but the BBC pulled in an audience of 10.5 million compared with Ant and Dec's Saturday Night Takeaway at 7.2 million.

And it was 22-year-old Billie causing the most excitement among viewers.

The Beeb's reincarnation of "the doctor" after 16 years lost in space paid off thanks to Billie who stole the show as the Timelord's assistant Rose, a resourceful young woman from a hard-up East End background.

The first episode of the returning sci-fi series received an ecstatic reception, internet sites lighting up with messages from delighted aficionados.

In hundreds of reviews appearing on the internet, Billie was heaped with praise by fans.

Comments included "Billie 's performance is spot-on and very easy on the eye" and "Piper lights up every moment". The BBC introduced Christopher Eccleston as the ninth doctor and the show received praise from fans anticipating the moment for years.

Hundreds of private "premiere" parties were held all over the world by devotees.

One of the biggest was at the Printworks pub in Clerkenwell, central London, where 300 Dr Who fans watched the programme.

Manager Goncalves Nuno said: "It was like having one massive family in here celebrating the birth of a new baby." The estranged wife of showbiz tycoon Chris Evans, she landed the part of Rose after her performances in The Canterbury Tales and the BBC drama Bella And The Boys.

Billie first came to public notice at 15 as a singer with the hit Because We Want To. Now she has also landed a part in Hero, another BBC drama.

She and Evans separated during filming of Doctor Who and plan to divorce though they say they are still friends.

Suddenly she is being seen as a serious actress following a performance which won the spectacular ratings victory over ITV. Her acting talent surprised many who had regarded her as merely a one-hit singer with ambitions above her station.

Caption: LOSING OUT: Ant and Dec were TV war's casualties