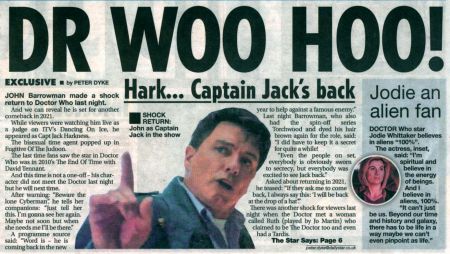 JOHN Barrowman made a shock return to Doctor Who last night.

And we can reveal he is set for another comeback in 2021.

While viewers were watching him live as a judge on ITV's Dancing On Ice, he appeared as Capt Jack Harkness.

The bisexual time agent popped up in Fugitive Of The Judoon.

The last time fans saw the star in Doctor Who was in 2010's The End Of Time with David Tennant.

And this time is not a one-off - his character did not meet the Doctor last night but he will next time.

After warning: "Beware the lone Cyberman", he tells her companions: "Just tell her this. I'm gonna see her again. Maybe not soon but when she needs me I'll be there."

A programme source said: "Word is - he is coming back in the new year to help against a famous enemy:' Last night Barrowman, who also had the spin-off series Torchwood and dyed his hair brown again for the role, said: "I did have to keep it a secret for quite a while!

"Even the people on set, everybody is obviously sworn to secrecy, but everybody was excited to see Jack back."

There was another shock for viewers last night when the Doctor met a woman called Ruth (played by Jo Martin) who claimed to be The Doctor too and even had a Tardis.

Caption: SHOCK RETURN: John as Captain Jack in the show

The actress, inset, said: "I'm spiritual and believe in the energy of beings. And I believe in aliens, 100%. "It can't just be us. Beyond our time and history and galaxy, there has to be life in a way maybe we can't even pinpoint as life."